Difference between revisions of "The Flier"

Humanity has always been fascinated with flight. Now, your meeples can take to the skies, though you never know where they'll land.

Shuffle the new landscape tiles with those from the basic game and stack them normally. Place the die within easy reach of all payers.

After placing a tile with a flying machine on it, you may choose to place a meeple either normally (and then follow all normal rules of placement) or on the flying machine.

When you place a meeple on the flying machine, [1] [2] your meeple will move in a straight line in the direction that flying machine faces. Roll the flight die and move your meeple a number of tiles equal to the number of pips on the die (one to three tiles). Your meeple may be placed on any incomplete feature [3]on that tile, even if that feature is already occupied by other meeples. However, meeples placed by a flying machine can never be placed in a field, even if that field is unoccupied. [4] [5] [6] [7] 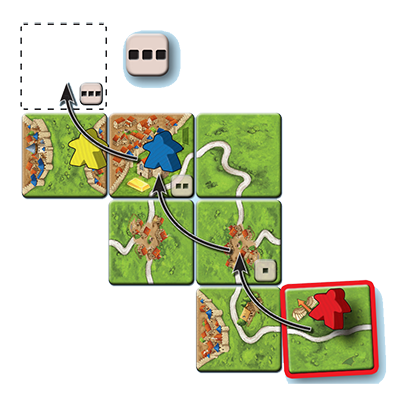 Example 1: You place a tile with a flying machine, and decide to try placing a meeple on that flying machine (which is facing up and left). You roll a 3. Had you rolled a 2, you would be able to place your meeple on the monastery (even though a blue meeple occupies it) or the city (even though a yellow meeple occupies it). You could not have placed on the road, because it is already completed.

Example 2: You place a tile with a flying machine (which is facing left), this time rolling a 2. You must place your meeple on the city (next to the blue meeple), since you cannot place on the field or on the already-completed road.

If the tile with the aircraft symbol completes a feature after placing the tile, the feature is scored as usual. [8]

At the end of the game, normal scoring for incomplete features applies. [8]