Difference between revisions of "The Tower/fr"

2. Placing a meeple or a tower floor

After placing your tile, you now have 4 actions to choose from:

Whenever you place a tower floor, you may immediately take 1 meeple off the board; it can belong to any player, including yourself. The captured meeple is placed in front of you. When "capturing" your own meeple, return it to your supply. 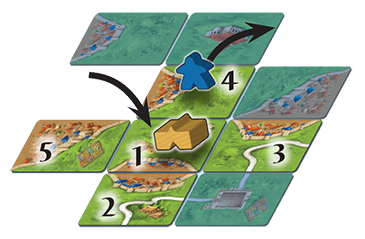 Example 1: You place a tower floor. You capture the blue meeple found on tile 4.

Placing the second level in a tower would give you access to 9 tiles from which to capture a meeple (see example below). 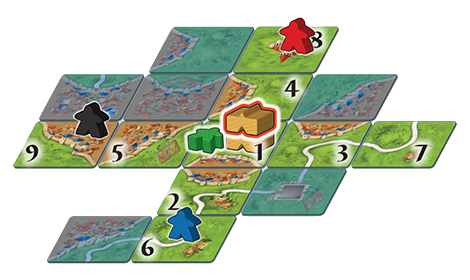 Example 2: You placed the second tower floor. You may now capture one of the following: the green meeple (1), the blue meeple (6), the black meeple (9), or alternately, take back your own (8).

Consequently, each floor added to a tower extends its reach by 4 tiles (one tile in each direction). [2] This reach goes beyond empty spaces on the board and over all towers. There can be any number of floors in an open tower.

Question: Can a shorter tower capture the meeple from a taller tower, or does the tower need to be equal or greater in height?

Answer: The height of the tower only determines the range of the ‘attack’ and has no other function.

When you place one of your meeples on a tower, [3] that tower is now closed and no more floors may be added to it. [4] Your meeple stays there until the end of the game (you may not take it back), or until it is captured (which you may do yourself). Players will usually take this action to protect their meeples on the board.

In addition, during your turn you may buy back one of your captured meeples. Pay the player who captured it 3 points (you reduce your score and increase theirs).

If you do not have at least 3 points, you may not buy back a meeple (this would drop your score below 0, which is not allowed). You may use a meeple in the same turn you buy it back.

Many figures now exist within the world of Carcassonne, and some questions may arise when you play with The Tower expansion. Here is a list of the various figures and the actions you may and may not do with them.

Buying back captured figures always costs 3 points, regardless of which type of figure is being bought back.

Question: How often does prisoner buy-back occur in a “double turn” (e.g. just once, like fairy scoring, or twice, as part of a repeated step)?

Answer: It happens once per turn. The double-turn is [truly] only a single turn.

The following examples illustrate this sequence: 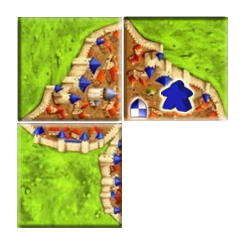 Example 1a: Blue placed a meeple in this city in a previous turn. 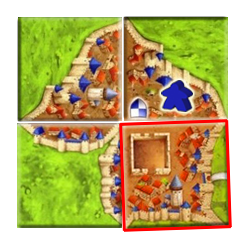 Example 1b: Now it's Red's turn and the player completes the city with a tower tile. 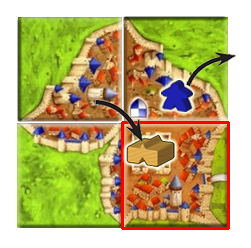 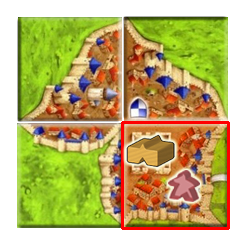 Example 1d: The city is unoccupied at this point, so Red can place their phantom (as second figure) and claim the city. Finally, Red scores 10 points (4 tiles x 2 points + 1 coat of arms x 2 points) for the city.