From WikiCarpedia
Jump to navigation Jump to search
This page is a translated version of the page Abbey and the Mayor and the translation is 41% complete.
Other languages:
English • ‎Nederlands • ‎français • ‎română 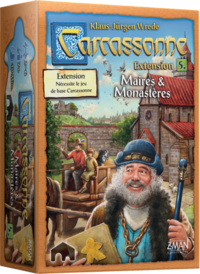 If you wish to place an abbey, do not draw a Land tile at the beginning of your turn. Instead of drawing and placing a Land tile, place your Abbey tile. An abbey may only be placed in an empty space surrounded on its 4 orthogonally adjacent sides. In other words, the abbey may only be used to fill a hole. What is depicted on the 4 adjacent tiles (fields, roads, cities) does not matter; the abbey always fits. If no such hole exists, you may not place your abbey. 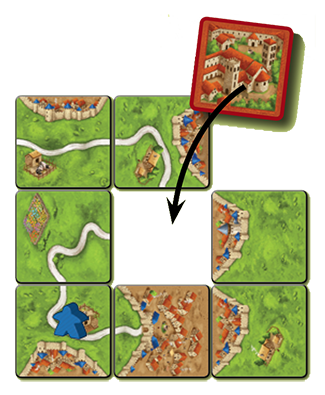 Example 1: Since 4 tiles are already adjacent to that empty space, you may place your Abbey tile there.

If one or more players have not placed their abbey when the last landscape tile is drawn and placed, they may still do so, in clockwise order starting from the left of the person who placed the last tile, as long as it is in accordance with the rules. The game is then over. [4] [5]

The abbey behaves like a monastery. You may choose to place a meeple as a monk onto your abbey. [6]

The abbey completes the side of each tile directly adjacent to it. Once you have placed your abbey (and chosen whether or not to place a monk there), score any features completed by its placement. [7] 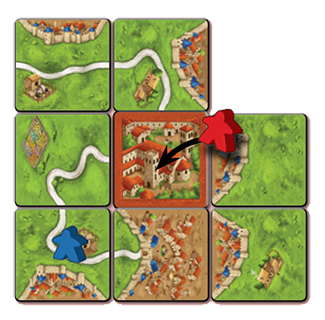 Example 2: You place a meeple as a monk. The road with the blue meeple is complete. Blue scores 3 points.

Scoring the abbey itself, both during a game and at game end, is identical to scoring a monastery.

You may place your mayor on the tile just placed instead of placing a meeple. [8] A mayor may only be placed in a city containing no knights [9] [10] or mayors. All other rules that apply to meeples also apply to mayors.

The strength of your mayor is equal to the number of coats of arms in the city it occupies. If two or more players have meeples in the same city, it is scored as follows:

When scoring a city, each player adds the strength of their meeples in the city. The player with the highest strength scores the points for that city. In case of a tie, all tied players score full points.

The value of a city is not affected by a mayor.

When a city is completed, mayors in that city are returned to their respective supplies.

If a city containing only mayors is completed, but with no coats of arms, each mayor has 0 strength and scores no points for the city.

Question: Blue has a mayor in a city with no coats of arms. Does the city count as occupied? And if so, when the city is scored, will Blue score points?

Answer: The city is occupied. The mayor has no "strength," so it counts as if there is no meeple, and scores no points.

You may place a barn instead of placing a meeple. [13] If you place a tile that creates a junction where 4 tiles connect to create an open field, you may place your barn directly on that junction. In other words, the corner of each tile forming this junction must only depict a field in order for a barn to be placed there. 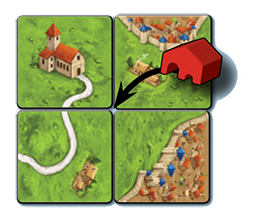 Example 1 - The corner of each tile is a field: you may place a barn here. 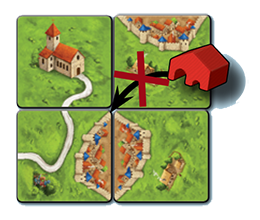 Example 2 - The corners of both bottom tiles have city segments: you may not place a barn here.

FARMER SCORING AFTER BARN PLACEMENT
If there are farmers in the field where you place your barn, that field is scored immediately, [16] just as it would be at the end of the game. Therefore, the player with the most farmers in that field scores 3 points per completed city in the field. It does not matter which player placed the barn that initiated this scoring.

BARN SCORING AT GAME END
At the end of the game, you score 4 points per completed city in the field your barn occupies. If multiple barns occupy the same field, all concerned players score full points.

You may place your wagon on the tile just placed instead of placing a meeple. [17] A wagon may be placed most places a meeple may normally be placed (road, city, monastery, abbey [18]), but it may not be placed in a field.

When scoring a feature (road, city, monastery, etc. [18]) a wagon occupies, the wagon is treated like a normal meeple.

After scoring, you may return the wagon to your supply, or you may move it to a directly adjacent unoccupied, incomplete feature (road, city, monastery, etc. [18]). Adjacent, in this case, means that the feature is on the same tile or a tile orthogonally or diagonally adjacent to the tile the wagon is moving from. [19] If there are no such features for your wagon to move to, it must be returned to your supply.

If several wagons are involved in a scoring phase, each concerned player chooses whether to return or move their wagon in clockwise order starting with the active player. 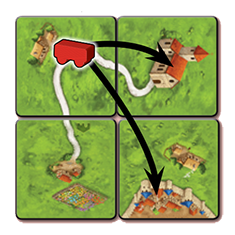 Example 1: You score 3 points for the road. Then you may move your wagon to the monastery on the right or the city below. 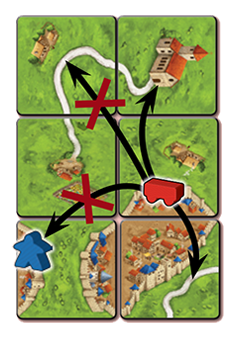 Answer: The wagon can be deployed instead of a normal meeple. If the city is immediately completed, then it’s scored (wagon or "normal" meeple). After scoring, the wagon can be moved. All of that is possible in a single turn. [Wagon movement is not in place of deployment.]

Question: If cities with trade goods are completed by placement of an abbey tile, are the goods tokens awarded as usual to the player placing the abbey tile?

Answer: Yes, as the player completed the city.

Question: May the pig be placed in a field that was just connected to a field with a barn, i.e. on the newly placed tile (immediately before scoring)?

Answer: Yes, the pig may be placed in already occupied features [and phase 2. Placing a meeple still happens normally].

Answer: This is no longer entirely true. Placing of a barn, and the subsequent scoring of the field, does count as an opportunity to remove a meeple from the city of Carcassonne. Now that fields can be scored at times other than at the end of the game, meeples from the market can be moved to fields earlier in the game. That occurs immediately after the placement of the barn, and before the fields are scored. [Joining of a field containing a meeple to a field with a barn would logically be another opportunity – Chris O.]

Scoring fields with a barn

1. Scoring a field when placing a barn