The distribution list here is organised by the topology of the edges. For example:-

The tile notation and headings are ordered alphabetically, according to the following hierarchy:- 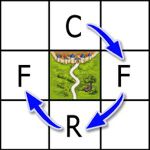 This tile has an edge topology of
" City, Field, Road, Field "
and would be listed under CFRF

Note: The tile outlined in red is the Start Tile.