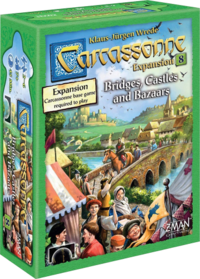 This is the eighth major expansion for Carcassonne and introduces some new aspects to the game. Traveling traders arrive in the land and organize bazaars, in which haggling is considered an art. At the same time, engineers are expanding the road network with modern bridges, and small castles are being built everywhere to defend the region.

This expansion includes 12 tiles that represent city segments, road segments and cloisters in new configurations plus the addition of bazaars which will help create much more than a beautiful landscape.

Then, give each player a number of bridges and castles:

Just like in the base game, you must place tiles so that its edges match the edges of the tiles already in play. After placing a tile, you may [1] place a bridge, which counts as a road and connects roads over features or meeples on that tile. [2] 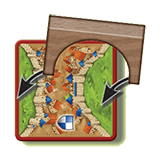 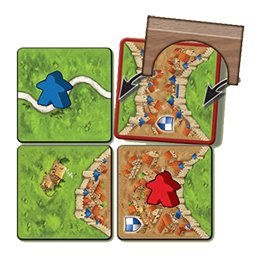 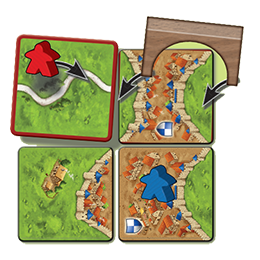 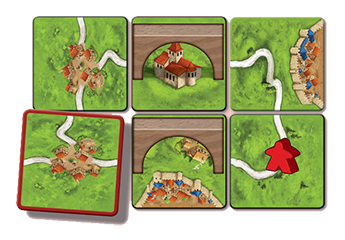 Example 6: You placed a tile to complete this road, and score 6 points.

When you place a tile that completes a small city (a city consisting of only 2 semi-circular segments [6] [7]), the owner of the small city chooses to either score 4 points as normal, or to place a castle on that small city instead.

When the owner places a castle, cover the small city that was just completed with a castle from your supply, and place the meeple that was in the small city on top of the castle. [8] [9]

Once placed, a castle remains on that small city until the end of the game. 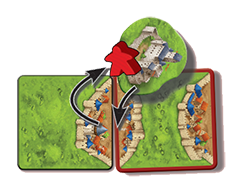 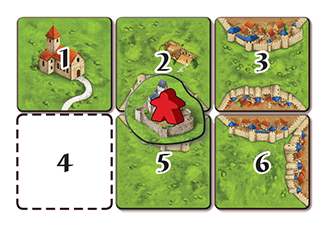 Example 2: The tiles and spaces numbered 1 to 6 are neighboring your castle. You can score points when the following features are completed: (The small city on 3 and 6 was scored before your castle was placed, and you cannot score points from it any more).

At the end of the game, remove all the meeples still standing in a castle in the playing area before the final scoring. Nobody gets more points for them. [21]

When determining the value of a field, castles are worth 4 points (instead of 3).

When you draw a tile with a bazaar on it, do the steps: 1. Place a tile, 2. Place a meeple and 3. Score a feature normally. [22] You cannot place a meeple on the bazaar.

After you have placed a bazaar and completed your turn, a bazaar auction of landscape tiles takes place. Skip this step if there are fewer tiles remaining than there are players.

Draw and reveal a number of tiles equal to the number of players. The player on your left (the first auctioneer) then chooses one of those tiles and bids a number of points for it (the bid can also be 0 points [23]). Continuing clockwise, players take turns bidding either a greater number of points or passing, until all players have had the chance to bid or pass. Then, the player who chose the tile must either:

It is possible to bid more points than you have, and players can have a negative score as a result of buying tiles, especially at the beginning of the game.

Once a player has taken a tile during a bazaar auction, he or she is out of the round and cannot bid any more. Among the players who have not yet taken a tile this round, the next player clockwise from the previous auctioneer [24] chooses (as the new auctioneer) which tile will be auctioned next, and a new auction begins. This continues until only one tile remains, and the player still without a tile takes it for free.

Now all players have one purchased tile. Starting in clockwise order with the player on the left of the active player, [25] [26] all players play their purchased tile as in a normal turn with phases 1. Placing a tile, 2. Placing a meeple (if he or she wishes), and 3. Scoring a feature. Of course, nobody draws a tile in this "bazaar" round. [27] 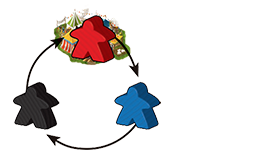 Once the bazaar round is complete, play resumes normally starting with the player to your left.

No chain reaction: If a bazaar tile auctions another bazaar tile, no auction takes place when the second bazaar tile is placed. Only after all auctioned tiles have been placed, a new bazaar auction can take place. [28]

Question: Inns affect those road segments they are on, that is, directly adjacent to. So a bridge placed on a tile with an inn would not be affected by the bridge, since the inn would not be accessible from the bridge. Is this correct? See tile examples from Exp. 8 below.

Answer: Yes, that is right. The inn only counts for a road segment printed next to it. But a bridge could count as part of an "inn road" if it is linked to it. (1/2021)

The following table details the feature scoring modifiers and bonuses applicable to a feature when scored. The resulting points will be scored by the owner of the castle unless the castle lord is a mayor:

Additionally, some special situations may arise when meeples from different players share the majority in the same small city, since each player may decide differently. So, we may encounter the following scenarios:
Additional notes:

If you draw a bazaar tile and can perform your builder-turn, first take the appropriate number of face-down tiles and perform the bazaar and the auction. Then a new round with a special property starts – each player has an open and known tile instead of drawing an unknown tile, and you cannot place your abbey as your first tile. If you placed your auctioned tile and you can perform a builder-turn, you can choose to place your abbey or draw a new unknown tile. If any player draws a new bazaar tile [for their builder-turn or for message 4], it will be ignored until the last player who has an auctioned tile finishes his turn (including his builder-turn, if possible). Therefore, any ignored bazaars will not take place. Once the bazaar round is finished, you perform your builder-turn.

Note: The initial tile distribution by HiG in Germany and by MindOK in Czech Republic and Slovakia (not in Poland) presented the following differences by mistake: Tiles marked with (–) were missing and, instead, two copies of the tiles marked with (+) were included.