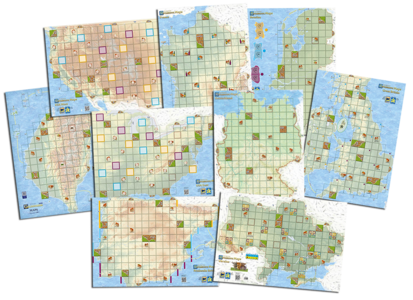 Each map is made from high-quality, strong, linen-embossed paper of A1 size (594 x 841 mm or 23.4 x 33.1 inches). The maps are delivered rolled up and the purchaser is recommended to flatten them by "bending against" before use or to press them flat again under a few books. Alternatively, they can also be attached to the table with a removable adhesive tape (crepe, for example). The latter also has the advantage that the map is not moved accidentally.

The maps require players to use their own game material from the base game and some major expansions, so they are not a standalone product but a complement to play a variant of the base game with extra tiles.

Additionally, HiG released Map-Chips, an expansion for Carcassonne Maps. Map-Chips, using the same tokens, provide an expansion with a different set of rules for each map. In France, players will press wine, whereas Benelux players may pick face-up tiles stacked on islands. On the Iberian Peninsula, players go geocaching; on the British Isles, players might play twice as fast; in Germany and Taiwan, players have the possibility to upgrade their meeples; in USA East and West, players can take a peek at covert tiles; and in Ukraine, players may trade to earn points.

How to use these rules

The rules are organized as follows: There is one page describing the basic common rules for all the maps. The second page contains the basic rules for Carcassonne Maps - Germany as they were released initialy. They are kept here for the sake of completeness, but all the rules are covered by the previous document with the common rules.

Below you will also find a section dedicated to Map-Chips that links to a page per map, as the rules are different in each case.