Each player picks one castle of his choice. When you play as two or three players you can take 2 castles each. Alternatively, you may shuffle the castle tiles and deal them out. Then, you place your Castle tiles face up in front of you. [1]

Instead of taking a Land tile from the draw pile players are allowed to place one of their castles. Note that a Castle tile must not touch another Castle tile, neither directly nor with the edges (diagonally). All other placing rules stay the same as in the basic game. 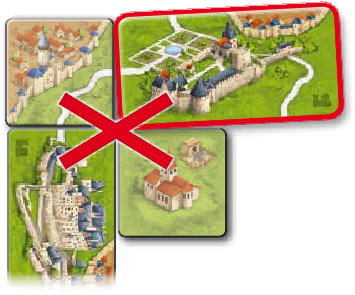 Having placed their Castle tile, players are allowed to place a meeple. They may place the meeple on a road, city, or field or as lord in the castle.

Scoring of a completed castle

A castle can be completed and scored the same way as monasteries. As soon as the castle is surrounded by other Land tiles, you, the lord gets 12 points and take your meeple back to your stash.

At the end of the game all Land tiles surrounding an incomplete castle score one point. The Castle tile itself counts as 2 points. 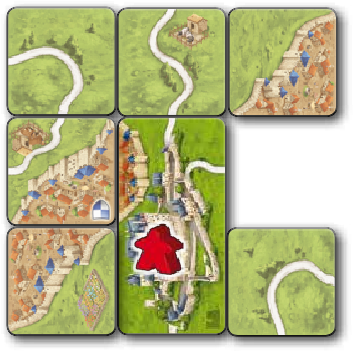 Scoring roads and cities around a castle

If a road or a city which ends on the Castle tile is completed, players get bonus points. Each player who gets points gets 3 bonus points for each castle which is involved. [2] [3] It does not make any difference if the castle is occupied or not. 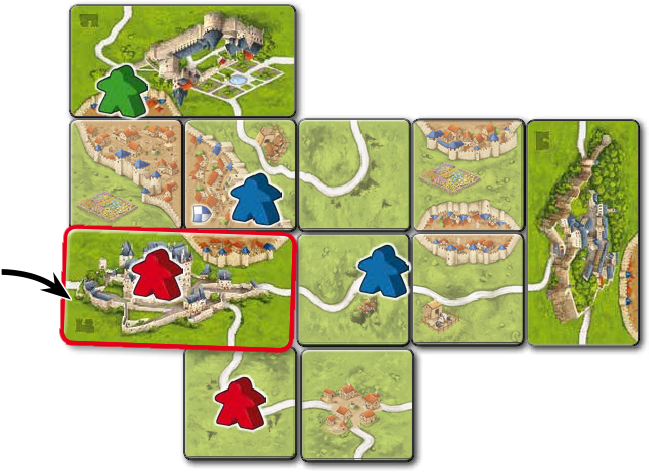 Roads: Roads looping back to a German castle will consider the two square spaces occupied by the double-sized tile separately. [4] 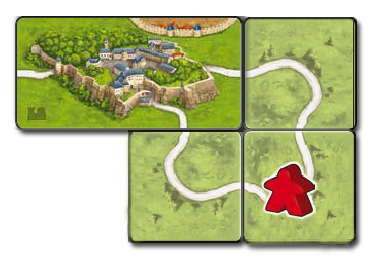 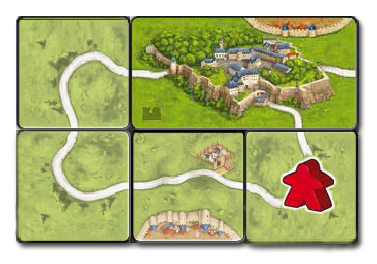 Monasteries: Since monasteries are scored according to the occupied spaces by the monastery itself and its adjacent spaces, a German castle tile counts as the number of spaces it occupies: 1 or 2 depending of its placement relative to the monastery.

Question: Can we assume that monasteries A and B also score 9 points? 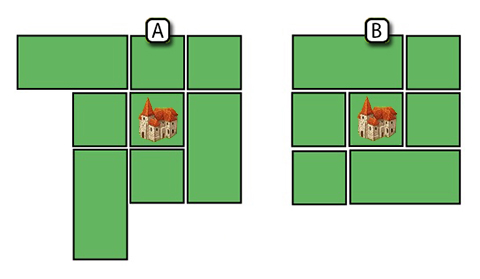 Examples of monastery scoring with German castles. The player gets 1 point for the monastery tile and 1 point per occupied space around it, no matter if it is a square tile or part of a double-sized tile:

At the end of the game there aren't any bonus points for cities or roads.

Question: Does a German castle count for field scoring?

Answer: No, it doesn't count for field scoring. The German castle is on one tile, so its has less functions than a castle that sits between two tiles. (10/2015)

Question: How should we consider double-sized tiles for towers and flying machines?

Answer: Even if it is a double tile, you simply count the spaces (areas). A double tile still consists of 2 spaces. Therefore it doesn't matter if you use double-sized tiles or normal tiles for the tower, flying machine or a dragon, the "range" stays the same. (1/2021)

Question: Should we consider that we should always count spaces (areas) and not tiles, and then consider any tiles in that space if more than one or part of one?

Answer: Yes exactly. For example, a dragon could walk 2 steps on a double-sized tile, but if it is a German castle, it would already eat the meeple on his first step on the tile. (1/2021) 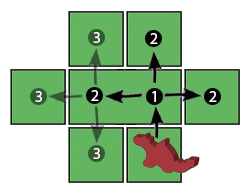 Example 1: The dragon starts to move and enters a German castle tile that permits several options for its second step, one of them still on the same tile. 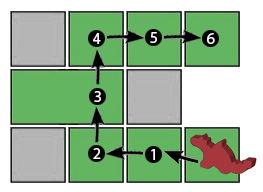 Example 2: This dragon movement includes a German castle tile. The dragon affects the whole tile in step 3 even if only it lands on one of the spaces occupied by the tile. 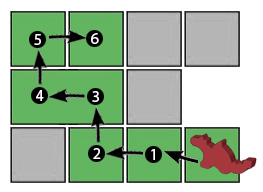 Example 3: This dragon movement includes a German castle tile. Steps 3 and 4 happen on the same tile but the dragon occupies two different spaces before leaving the castle tile. 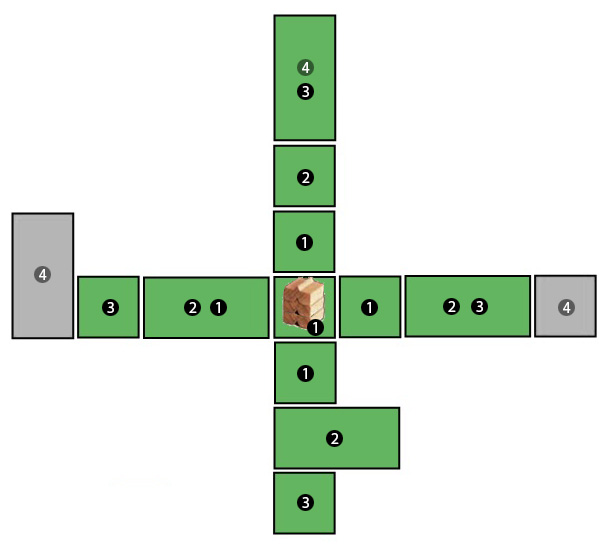 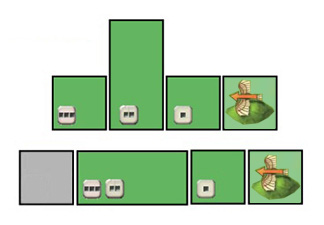 Example F1: Two cases of flier trajectory involving German castle tiles. In the example at the bottom, the flier can land on the German castle if the die roll is 2 or 3. 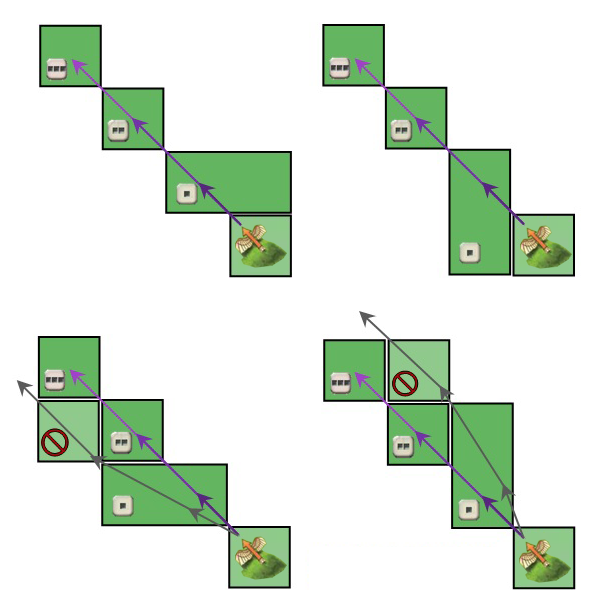 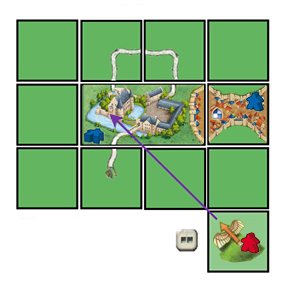 Depending on the position of a German monastery tile overlapping any of those rows or columns, only one or both square spaces of a double-sized tile will be taken into consideration for the scoring. [5]

Answer: The watchtower will consider all the meeples on the double-sized tile. (10/2022) 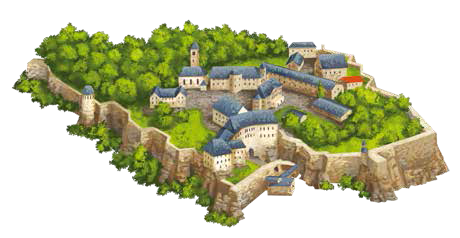 This castle is one of Europe's biggest hilltop fortresses. It is situated in Saxon Switzerland in the Elbe Sandstone Mountains near Dresden. The fortress was built on top of a rock plateau 240 meters above the river Elbe. Over a period of more than 750 years, this place became an impressive ensemble of buildings of the late gothic period, the renaissance, the baroque and the 19th century.
http://www.festung-koenigstein.de 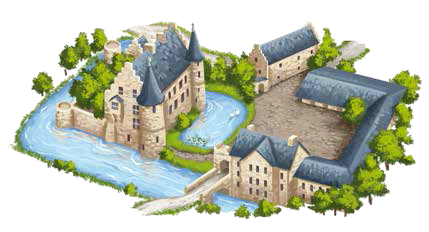 This water castle is situated between Cologne and Bonn and is one of the few castles of the late Middle Ages in the Rhineland still preserved. The knight Arnold von Buschfeld is said to be the builder of this castle. First mentioned in a document in 1337, the castle is nowadays private property and can be rented for events.
http://www.burg-konradsheim.de 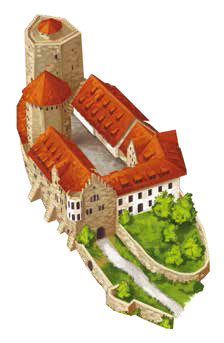 This castle was built around 1150 near the town of Rieneck above the river Sinn in Lower Franconia in Bavaria. Today, the castle serves as a scouting facility and is owned by the German Christian Guide and Scout Association. Particularly well known – and the centrepiece of the castle – is the “Thick Tower“ built in the 12th century with his romantic wall chapel constructed completely enclosed by the keep's wall.
http://www.burg-rieneck.de 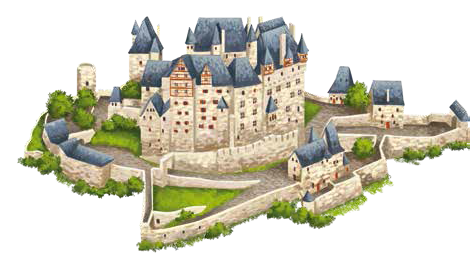 It is considered the paragon of German castles. It is situated in the Eltz river valley near the Eifel. It was built in the beginning of the 12th century and has yet never been destroyed. Eltz castle has a history full of myths, luminaries and distinguished art.
http://www.burg-eltz.de 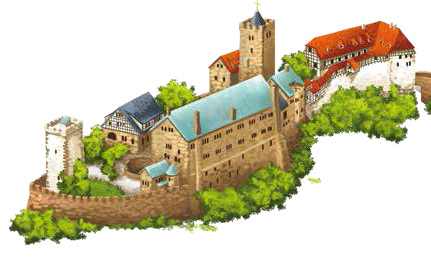 The Wartburg (Burg: german castle) is situated above the city of Eisenach in Thuringia. Built around 1067 under Louis the Springer ("the Jumper") the castle is – since 1999 – a UNESCO World heritage site. Between May 1521 and March 1522 Martin Luther, who had found shelter inside the Wartburg, translated the New Testament into German.
http://www.wartburg.de 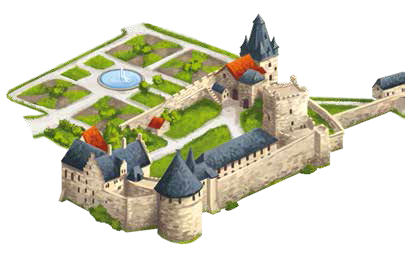 This is a castle complex in the middle of the city of Bad Bentheim in Lower Saxony, which has been built in the Early Middle Ages. First mentioned in a document in the 11th century it is believed to be one of the largest and most beautiful castle complexes in north-western Germany. Nowadays, the castles museum can be visited year-round.
http://www.burg-bentheim.de