From Wikicarpedia
Jump to navigation Jump to search
This page is a translated version of the page Game Figures and the translation is 20% complete.
Outdated translations are marked like this.
Other languages: 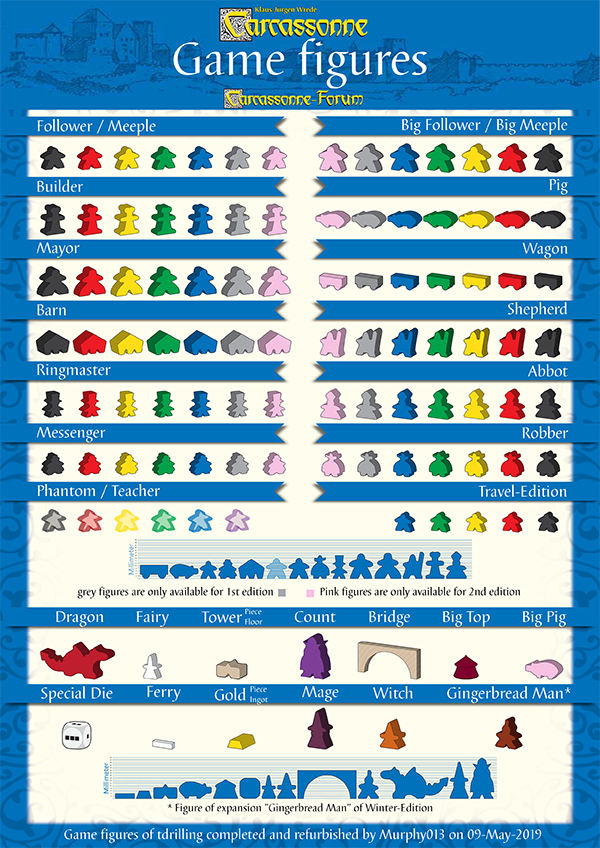 Picture: Game figure summary covering Carcassonne I & II, the Winter Edition and the Travel Edition. Created by tdrilling and refurbished by Murphy013 (05/2019)

Note: This image is available as a A4-size PDF file at Carcassonne Central (Click here)

The following features cannot be claimed so no figure can be deployed to them:

The following symbols on tiles and tokens cannot be claimed so no figure can be deployed to them:

No special figures in selected expansions.

This Expansion Selector allows you to pick what expansions (or parts of them) to use in the reference pages of WICA. According to your selection, the Order of Play and Scoring sections will be adapted. This way, you can customize WICA to suit your game without any hinderance from the expansions left out.

As hinted above, the expansions combining multiple elements permit a fine-grain selection of its elements. For example, you can choose the abbey tiles and the wagon from "Abbey & Mayor" and to leave out the barn and the mayor.

The selector has several tabs and below there is an area that lists the current selection at all times, no matter the tab displayed.

You can click on any tab label to go to the desired tab. Additional clicks on a selected tab will collapse it and expand it back in order to access the selector when needed. Switching to another tab will expand the selector automatically.

The following sections describe the tabs and their functionality.

The first three tabs from the left allow you to pick expansions in full or partially when possible.

These tabs show a listing of expansions where each label is preceded by a checkbox to allow its selection and deselection if full.

Those expansions with various components show a clickable "[+]" symbol after them when closed or "[–]" when open. In the latter case, all the components are displayed and can be selected and deselected individually.

This is the fourth tab from the left. It allows you to choose from a predefined list of available expansions sets. This tab contains the following elements:

This is the fifth tab from the left. It allows you to choose what Carcassonne editions are displayed and your preferred edition. The editions considered are the 1st Edition (C1), the New Edition (C2+C3), and the Winter Edition (WE), which is included in a creative way if some of its expansions are of interest.

This tab shows a label similar to "Filters (C1/C2+C3/WE) #" that lists all the editions selected in parentheses and one of them is underlined, indicating that it is the preferred one. The hash sign "#" is present if rules adaptations are highlighted.

This is the current tab displayed with help information about the Expansion Selector.