With so many expansions to the basic game, there are numerous ways to combine them with each other. Many people choose which expansions to play on a game-to-game basis—and the addition of small watermarks on the tiles has helped in this —while others prefer to mix all the expansions together and play what has become known as "mega-Carcassonne." You can even mix expansions from different editions -Carcassonne I (C1) and Carcassonne II (C2.)

Some of the considerations below deal with the fact that some C1 mini expansions were released alone and as part of a major expansion. If this is not your case, please ignore those considerations.

Throughout the rules, there are a few indications of what a game of mega-Carcassonne would look like. Some are listed below:

As such, the following guidelines can be inferred:

Of course, a game of mega-Carcassonne need not be ended until all the tiles have been played (a very long game!) but could easily be shortened by using only one half of the tower dispenser.

There is, in fact, no reason why you shouldn't combine multiple sets in some logical manner. So, for example, you may well decide to include the land tiles of King & Robber Baron with the "duplicate" land tiles in Exp. - 6 Count, King & Robber, while leaving out the duplicate King & Robber Baron (there is simply no way to include two of those.) And you might include two copies of The River II, either mixing the extra fork tile with the others, or omitting it altogether. Nowhere in the rules does it say that every tile used must have a unique configuration: the basic game includes eight FRFR tiles (a field divided by a road.)

The general order in which "starting" expansions should be placed would seem to be: 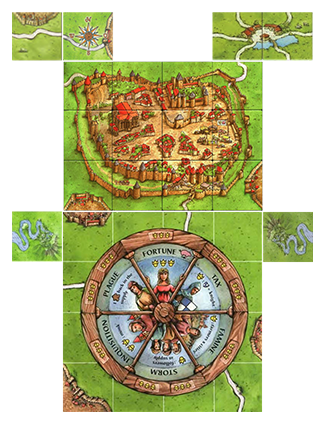 Example 1: Setup with C1 expansions only: 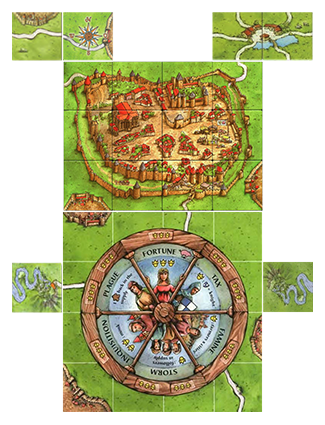 Example 2: Variation of the previous setup with C1 expansions only: 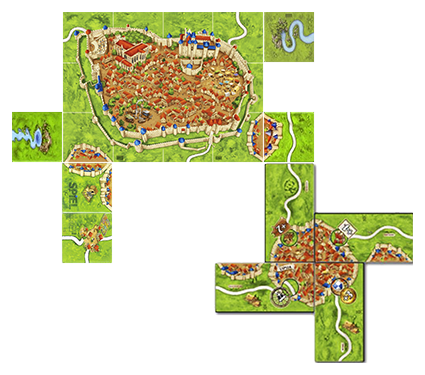 Example 3: Setup with C2 expansions only: 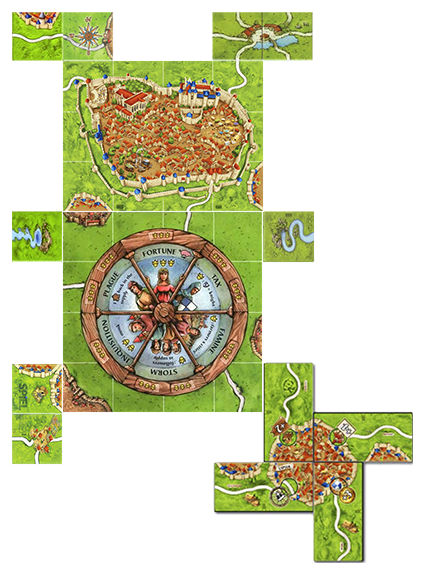 It is important to note that, like any other feature, the river does not have to be completed (that is, ended with a lake) if the playing area does not allow it.

The Plague expansion states that 17 of the normal land tiles from the basic game must be separated out and placed before the rest of the tiles, into which the plague source tiles have been mixed, are used. The number 17 seems to have been chosen because there are 18 flea tokens (17 + 1 starting tile). There is, as yet, no indication of what to do if other expansions are being used: the most logical approach would seem to be either:

As soon as a final ruling is made, this page will be updated. However, as Hans im Glück notes that The Plague was not intended for use with other expansions, a final ruling for this may be a long time coming.

The following table lists the total number of tiles available in a complete set of mega-Carcassonne, as well as the ‘spare’ tiles which will be left over (such as surplus springs) if you use all the expansions.

This tables list the total number of tiles available in the basic game and in each expansion.

Some expansions have mechanics that make them too strong or too insignificant during a Mega-Carcassonne game. The following house rules address some of these issues.

Exp. 10 - Under the Big Top: Scoring the ringmaster bonus

The Wheel of Fortune: Scoring meeples on the crown

The plague: Spreading the plague