There are two River Expansions:

Games Quarterly #11 ✎ expansion from 2006 includes 2 river tiles that can be combined with any river expansion. One of these tiles is a new river source with a road. It can replace the one included in other rivers and help create smaller farms around the river.

River II shows river segments as well as familiar features such as cities, cloisters, roads, and fields plus a river fork, an inn (tie-in with

Traders & Builders ✎ ) and a volcano (tie-in with

The Princess & the Dragon ✎ .)

River III has the same layout of river and claimable features as River I, thus it is considered the same expansion. However, this version also adds features to mesh with the

Hills & Sheep ✎ expansion – there are 2 tiles with a sheep and 2 tiles with a vineyard. Additionally, the backs of the river tiles in this version are the light gray of standard tiles rather than the dark gray of starting tiles, and there is a new expansion symbol on the front.

Games Quarterly #11 provides a new river source with a road ending at a small cottage. The road splits the farm surrounding the river source:

If playing with River II, the fork tile should be set aside along with the source and lake tiles. The fork tile is placed first (after the source tile) by the first player.

The players take turns placing tiles [10] [11] When the river is finished, the lake tile is placed, and the game continues with the remaining tiles. 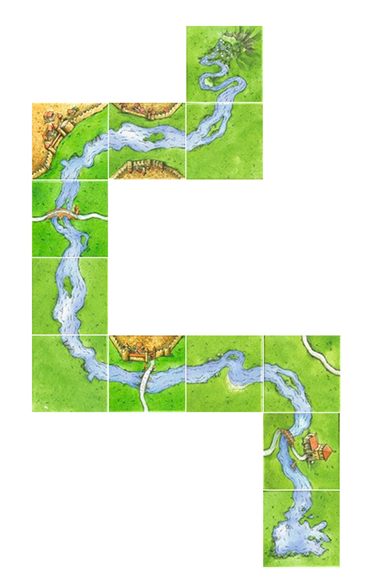 Example of a river configuration in River I/III

If playing with River II, the first player places the fork. [12] [11] After this, each player on his or her turn places a tile either on left or right branches of the river. [13] The volcano tile is placed last. The player who places the volcano may not deploy a follower to this tile, but should place the dragon on the tile instead. [14] The player may therefore take another tile immediately, [15] thus beginning the normal game. The river tiles can be placed as the player wishes, except for two exceptions: no 180° turns are allowed, and the two river branches must not be connected. 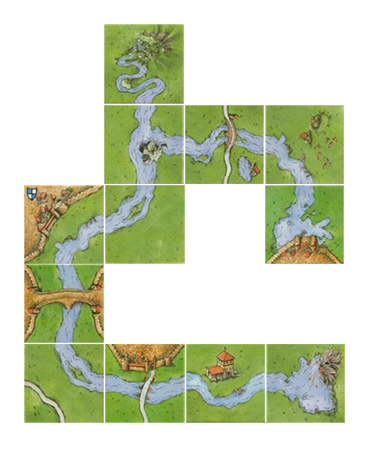 Example of a river configuration in River II

Important: A U-turn with the river tiles is not possible. This means that a 180° turn is not allowed, as it may lead to difficulties in placing all the tiles.[16] 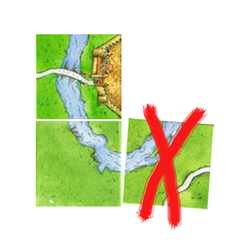 Immediate U-turns are not allowed in a river

When a player places a river tile, he or she may deploy a follower using the normal rules for placing a follower. [17] No follower can be deployed to the river itself.

River feature itself cannot be scored. All other features on river tiles are scored as usual. River segments separate farms.

If you don't possess the relevant expansions, the inn, volcano, pig-herd, vineyards and sheep tiles have no particular significance. [18]

The pig-herd tile earns the farmer who owns this farm an extra 1 point per city. If a player has the pig-herd and a pig (from the

The Count of Carcassonne ✎

The question of how to combine the various “starting” expansions of Carcassonne is a longstanding one, and HiG has changed its mind several times.

The original rules for

The Count of Carcassonne ✎ included the following clarification: “If the river is being used, then the spring tile should be placed next, and in such a way that the river leads away from the city.” Yet the rules still said that it was probably better not to use the expansions together, and this was the only piece of advice to make it into the introductory paragraph of its rules in

Count, King & Robber ✎ : “It is not recommended to combine

The Count of Carcassonne ✎ and any River expansion(s), as situations may arise in which it is impossible to place tiles properly.” 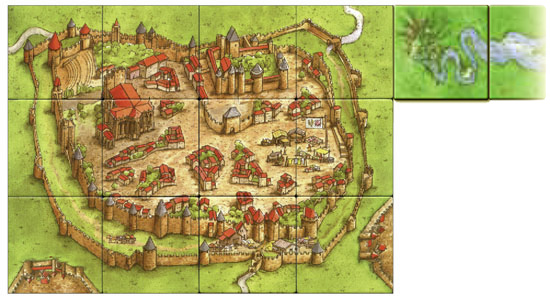 Example combining the City of Carcassonne with The River I

As indicated above, this is no longer the recommended approach. Instead, one should always remember the rule from the basic game: “In the rare case that a tile cannot be placed anywhere, it is removed from the game, and the player draws another.” If the river winds around the City of Carcassonne in such a way that you cannot place the next tile (river or otherwise), the tile should be placed to one side, and another drawn. An interesting corollary of this is that the river does not have to be finished: if it is impossible to do so, you do not have to place the final lake tile, and a permanent gap in the playing field might arise (which could, of course, subsequently be filled by an abbey from the

This clearly has consequences beyond combining the two expansions mentioned. Though the rules still say that U-turns are not allowed, resolving such issues is now much more straightforward—no more need to defenestrate players who insist on making awkward tile placements. And it helps considerably in establishing what a game of Mega-Carcassonne should look like.

Of course, some people will object that this rule destroys the aesthetics of the playing field. They might be right, and they are free to adopt a house rule which is more comfortable to them. But for the rules lawyers among us, this rule is an important development.

The Wheel of Fortune ✎

Example combining The Wheel of Fortune and The River

The sheep depicted on the river tiles are used with the

Hills & Sheep ✎ expansion. When a player performs a Gather the Flock action, the sheep depicted on the fields of these river tiles are to be counted and scored along with the Sheep tokens. These depicted sheep are permanent and may be scored multiple times during a game.

The vineyards depicted on the river tiles are used with the

Hills & Sheep ✎ expansion and add to cloister scoring according to the normal vineyard rules.

When playing without the

Hills & Sheep ✎ expansion, the depicted sheep and vineyards have no function.