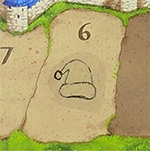 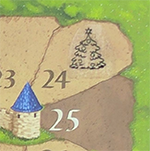 You may place a meeple according to the usual rules.

If multiple features score due to the placement of a tile, the active player decides in which order these scores will be carried out. (Thanks to Fritz_Spinne)

If one or more players fulfill one of the conditions above, each of them earns an extra new turn. These extra turns take place sequentially in clockwise order starting with the player to the left of the active player. After all these extra turns are performed, the original next player's turn will take place. (Thanks to Fritz_Spinne)

If a meeple simultaneously fulfills both conditions above, its owner will be granted two extra moves. (Thanks to Fritz_Spinne)

If a meeple simultaneously fulfills both conditions above, its owner will be granted only one extra move. (Thanks to Fritz_Spinne)

If the active player meets one of the conditions above and, at the time, he expanded a road or city with his builder, the active player first completes his builder's move, after which the extra turn granted by the Saint Nicholas scoreboard will take place. Any additional turns granted during the builder's turn will be carried out afterwards. (Thanks to Fritz_Spinne)

During scoring a feature, any points stolen by a robber on the scoreboard can trigger the condition that grants an extra turn. (Thanks to Fritz_Spinne)