The Solo Variant was released by Hans im Glück in 2020.

It is a variant for one single player but it can also be played as team-challenge.

To play this solo variant, a copy of the Carcassonne base game is needed. Use the following:

Choose 3 colors and set aside 4 meeples each. Each turn, you will play with another color clockwise, so in order not to get confused regarding the turn order, make the following preparations:

Option: Take an abbot (in a color you have not already chosen) and put it next to the color which you want to start with. After each turn the abbot moves clockwise to the next color and shows you which color you must use this turn. As some turns, with a scoring, can take longer and you might need to score the features for several colors, this can help you keep track.

Example 1: Preparing the tiles and the meeples: 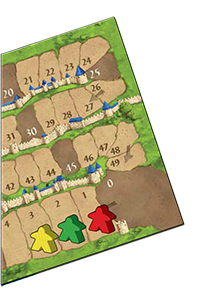 Example 2: Placing the meeples on the scoreboard

Gameplay and goal of the game

Each turn you will play with one of the three colors alternately and try to score as many points as possible. Continue to follow the procedure described below with each color each turn, until the game ends. However, at the end of the game, only the points of the color which is last on the scoreboard are counted. Therefore, you want to try to score points evenly distributed amongst each color.

Draw the top tile from the stack of the color being used this turn and place it according to the usual rules.

After having placed the tile, place a meeple of the respective color. As opposed to the usual rules, you must place a meeple, if it is possible.

Hence if there is a free feature on your tile, you must place a meeple on it.

If there is more than one free feature on the tile, you can decide which one you want to place the meeple on.

However, a meeple can never be placed as a farmer.

Example 1: It is Green's turn. Place a tile. You must place a meeple either on the city, the left road or the one below. The road on the right is already occupied.

Example 2: It is Green's turn. Place a tile. As the road is already occupied by Red, you do not have to place a meeple this turn.

Attention: If you have to place a meeple, because there is a free feature on the tile, but do not have any meeples of the respective color left, the game ends (after a possible scoring).

If you have completed a feature with a tile, score it.

Example 1: In Green's turn, you complete Red's road (and put a meeple on the monastery). As Red currently has the least number of points, Red’s meeple moves forward 3 spaces on the scoreboard for the road.

Example 2: Red and Green's city is completed. As Red currently has the least number of points, Red and Green's scoring meeples move forward 8 spaces on the scoreboard for the city.

If you complete more than one feature in a turn, each of them is scored separately, one after another and according to the abovementioned rules. You can decide in which order you score them. 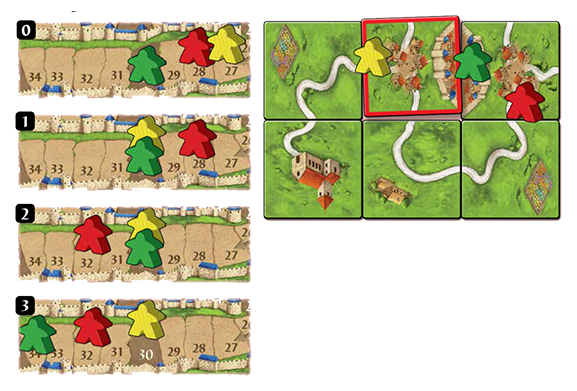 Example 3: The tile completed three features. Yellow’s road (3 points),Green’s city (4 points) and Red’s road (4 points). 0 Before the scoring, Yellow has the least points, therefore 1 Yellow’s road is scored first. 2 Next Red’s road is being scored, because now Red has the least number of points on the scoreboard, 3 then Green’s city. If you had conducted the scoring in a different order, you would not have scored points for all of the colors.

Tip: You may also complete features if the meeple color does not have the least number of points on the scoreboard. In this case you do not receive points but get your meeple back. This can be important to prevent the end of the game.

The game ends either after a turn in which you:
A) Have to place a meeple, but cannot
OR
B) Have placed the last tile.

The usual final scoring is omitted in both cases. Instead, this final scoring is conducted: You receive 2 points per meeple on tiles. However, those points can only be scored if the respective color of the meeple has the least number of points on the scoreboard. Here you can also decide in which order you want to conduct the scoring.

If you find this solo mode too hard or too easy, try these options:

You can check if you completed any these goals during a game.