Originally released by Hans im Glück in 2013, Carcassonne: South Seas is a clever tile-laying game set in an island paradise for 2 to 5 players, ages 8 and up.

"South Seas – Clear blue waters flow effortlessly around seemingly countless islands all connected by a sophisticated network of bridges. It is here that the busy people who inhabit this heavenly paradise frolic around to gather the gifts granted to them by nature. Fish from the sea, bananas from the islands, and the bridges are crowded with shell collectors showing off their latest find. From time to time, merchant ships will dock at the island in search of cargo: the islander that supplies the merchants with the wares they seek is well rewarded for their trouble."

The players take turns placing Sea tiles on the table. These tiles create Bridges, Islands, Sea Regions, and Markets on which the players may place their Islanders in order to collect the various Wares. At the end of each turn, the active player may choose to deliver Wares to a Ship in order to score points. Once all of the Sea tiles have been placed or all the Ships have been supplied with Wares, the game is over and the player with the most points is crowned King of the South Seas.

Play proceeds clockwise from the start player. Each player carries out their turn in the following sequence:

Then, the next player takes their turn.

1. Draw and place a tile

The first action a player must take on their turn is to draw a Sea tile from a face-down stack and place it connected to previously placed tiles. The following placement rules must be observed:

The Bridge and Sea Region are continued.

The Island is continued. 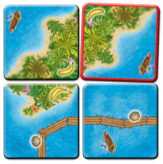 As an example, this placement is not allowed, as the Island does not continue onto the newly placed tile.

A player may freely show their opponents their newly drawn tile in order to discuss placement options. In the rare case that a newly drawn tile may not be legally placed, it is removed from the game and the active player will draw a new tile to continue their turn.

2a. Place an Islander

After a player has placed a Sea tile, they may place an Islander according to the following rules:

Shell Collector on a bridge

Banana Picker on an island

Merchant in a market

Fisherman in a sea region (a Fisherman is laid down!)

Blue may not place a Shell Collector here, as the Bridge is already occupied. Blue may, however, place a Merchant or Fisherman as indicated.

Blue may not place a Banana Picker here, as the Island is already occupied. Blue may, however, place a Shell Collector or Fisherman as indicated.

Note: If a player does not have any Islanders available in their supply, they do not have the option of placing one. No need to worry: There are several ways of retrieving those Islanders. Read on.

2b. Retrieve an Islander

If a player has zero Islanders in her supply, she may instead retrieve one of her Islanders from the board and return it to her supply. No Wares or Ships are awarded. Note: A player may choose to neither place nor retrieve an Islander.

When evaluating a completed feature, a player receives no points. Instead, Wares are awarded. Each type of feature gives a player a different type of Ware, or a Ship in the case of a completed Market.

A completed bridge gives shells A Bridge is complete when it is terminated on both ends, either by a junction (identified by the presence of a junction stone), an Island or a Market, or if the bridge forms a closed loop. This can result in bridges being very small or very large. 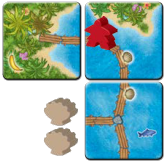 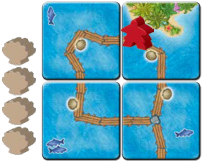 A completed island gives bananas An Island is complete when all of its borders are complete and there are no internals gaps. This can result in Islands being very small or very large.

A completed sea region gives fish A single Sea Region can consist of numerous tiles. A Sea Region evaluation can be triggered in two different ways: 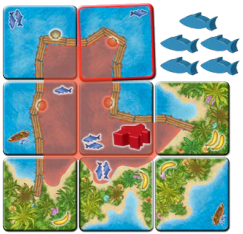 Example for the placement of a Fishing Boat: Red places a new Fishing Boat so that it connects to her Fisherman’s Sea Region and gains 5 Fish.

Important! A Fishing boat can only trigger an evaluation when it is first placed, and never during a later turn.

Thanks to the addition of a Fishing Boat, the Red player received 5 Fish. A Fishing Boat token is then used to cover a symbol showing two Fish.

A completed market gives a fish token A Market is complete when it is surrounded by 8 Sea tiles.

The player whose Islander occupies the completed Market gains the Ship token with the highest value, without delivering any goods. This token is placed face-down in front of that player and will give them points at the end of the game.

If there is more than one Ship token with the highest value, from these, the player takes one of their choice. The face-up supply of Ship tokens is then replenished to 4.

If several Markets are completed simultaneously, each player will receive the Ship token(s) they are owed in clockwise order from the active player. Replenish the face-up supply of Ship tokens to 4 after each token is awarded. 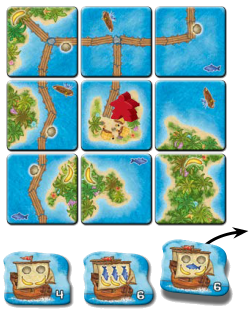 For the completed Market, Red gains one of the highest valued Ships. She chooses the 6 valued Ship on the far right.

Multiple Islanders on one completed bridge, island or sea region Through clever placement of Sea tiles and Islanders, it is possible for several Islanders to occupy the same Bridge, Island or Sea Region. 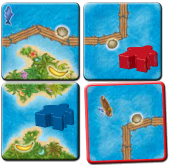 A Sea tile is placed that connects the two previously distinct Sea Regions. In this way, it is possible for multiple Fishermen to occupy the same Sea Region.

When a feature with multiple Islanders is completed, only the player with the most Islanders present receives the depicted Wares. In case of a tie, all tied players receive the Wares.

The new Sea tile connects the two previously distinct Islands and completes it. Blue and Red each gain 4 Bananas, as they are both tied for most Banana Pickers on the completed Island.

Returning Islanders to players' supplies After a Bridge, Island, Sea Region or Market is completed and evaluated, all Islanders present at the completed feature are returned to their owner’s supply, so that they may be used on a following turn.

Note: Islanders in Sea Regions whose evaluation was triggered by the addition of a Fishing Boat are also returned (even though the Sea Region is not necessarily considered "complete").

It is possible for a player to place an Islander, complete a feature and have the Islander return to their supply in one turn. To do so, players must act in the following sequence:

Red places the Sea tile and a Fisherman. The Fishing Boat on the newly placed Sea tile forces an evaluation and Red gains 3 Fish.

Red covers the group of two fish with a Fishing Boat token and returns her Islander to her supply.

4. Deliver to a Ship and gain points

At the end of a player’s turn, he may deliver Wares to exactly 1 Ship. A player may choose from the supply of 4 faceup Ships. The Wares a player must deliver are depicted on the sail of each Ship. To deliver to a Ship, the player returns the appropriate Wares to the supply, and places the Ship face-down in front of him. A new Ship is then drawn so that there are again 4 face-up Ships (unless the pile is empty). The number depicted at the bottom right of the Ship indicates the number of points it is worth at the end of the game.

This Ship requires a delivery of 2 Shells, 1 Fish and 1 Banana. It is worth 5 points.

Some Ships require particular combinations of Wares, while other Ships denote a flexible requirement: 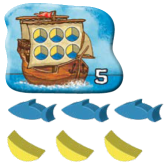 This Ship requires a delivery of 6 Wares of the player’s choice: In this example, the player delivers 3 Fish and 3 Bananas. The Ship is worth 5 points.

This Ship requires a delivery of 4 identical Wares: In this example, the player delivers 4 Shells. It is worth 3 points.

This Ship requires a delivery of 3 Wares of one type and 1 Ware of a different type: In this example, the player delivers 3 Shells and 1 Banana. It is worth 3 points.

Now, the player’s turn is over and the next player clockwise may begin their turn.

The game ends after the turn in which the last Sea tile is placed or the last Ship has been acquired.

All incomplete Bridges, Islands and Sea Regions are evaluated as though they had been completed. Players receive Shells, Bananas and Fish as they would have during the game. 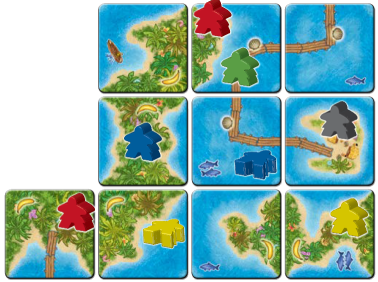 Now we total each player's points:

Whoever has the most points is crowned King of the South Seas and wins the game. 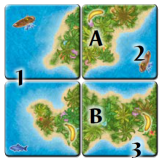 Islands A and B are distinct, although their tips are touching. Sea Regions 1, 2 and 3 are also distinct.

The Island on this Sea tile stretches from left to right and features two distinct Sea Regions.