Originally released by Hans im Glück in 2013, Friday adds a neutral figure and a bonus system.

On each player’s turn, the landscape tiles must always be drawn starting from the first stack, so that the stacks are depleted sequentially. When a stack has been depleted, this signifies that a week has passed.

Friday now makes his appearance and discovers his island. He will reward all players with special weekly bonuses.

After a stack has been depleted, the following player first draws an expansion tile before he performs his normal turn. He places this tile on the table in a separate area from the base game tiles, and places the Friday figure on it. The expansion tiles, therefore, begin to create the small island of ”Friday” as he discovers it. Players should roughly build the map of this island as shown below. After the player has uncovered a part of Friday’s island, he draws a normal landscape tile from the first stack and takes his normal turn. The placement of the remaining expansion tiles continues after each stack of 7 is depleted, and the Friday figure is moved to each new tile as it is placed, until Friday has discovered his entire island (all 6 expansion tiles). 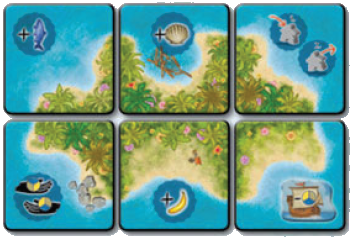 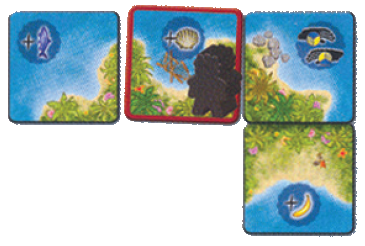 Example: The last card from stack 4 has been placed by a player. The next player draws and places one of the expansion tiles and moves the Friday figure to it. During this “week” (until stack 5 is depleted), each player receives one additional shell when scoring a completed bridge (as per the base game rules).