The individual game materials are described below:

Shuffle the new space tiles together with the tiles from the basic g ame. Then lay them face down in multiple stacks as usual. During the game, you lay the tiles next to the other tiles, as in the basic game — trading route tile next to trading route tile, and asteroid field next to asteroid field. Here is what you need to know about the new space tiles:

How to play the game

Before the game, each player receives 2 equipment tiles (lightsaber and blaster) in his colour in addition to the other game materials.

When you place one of your meeples on a space tile, you can give him one of the two equipment tiles. Choose either the blaster or the lightsaber, laying it next to your meeple so that it is clear that it belongs to this meeple, but doesn't cover up any important information on the tile. 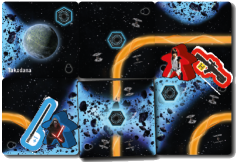 You are player blue. You have given your meeple a lightsaber. Player red has given his meeple a blaster. On your turn, you connect the two asteroid fields. A battle ensues.

Due to the faction symbols, you receive an extra die. Red gets to use the yellow special die instead of a normal die because of his blaster.

1st roll: Because of the lightsaber, your highest roll (6) becomes a 7. Player red also rolls a 7 with the yellow die. It's a tie. Both players receive 1 point. The battle continues.

2nd roll: On your second attempt, you both roll a 5 as your highest result. Because of the lightsaber, your 5 becomes a 6 and you win the battle. Player red takes his meeple and blaster and puts them back into his stock pile. Since he used 1 die, he gets 1 point.

You can only give one of your meeples either one lightsaber or one blaster. But, in the course of the game, it can happen that one of your meeples with a lightsaber and a meeple with blaster go into battle together when a trading route or an asteroid field are joined. In this case, you have the advantage of the lightsaber (+1 of your highest rolled die) and the advantage of the blaster (yellow special die) in a single battle. By combining both advantages in one battle, you can reach a high of 9.

When 2 or more players engage in a battle in which multiple meeples with blasters are involved, you have to take turns using the yellow die and remember what number you rolled.