Originally released by Hans im Glück in 2015, Carcassonne: Star Wars is an exciting tile-laying game set in the Star Wars universe in a galaxy far-away for 2 to 5 players, ages 8 and up.

Tile with an asteroid field

Tile with a trading route

Tile with a planet

Space tile backs - All tiles share the same back

Start tile with orange reverse side

Start tile with orange reverse side

The players take turns placing tiles. A galaxy of trading routes, asteroid fields and planets will be created, on which the players will place their troops in order to fight and score points. Players will fight for their place in the galaxy, whether or not they have the claim to do so. Once all galaxy tiles have been placed and final scoring has been completed, the player with the most points is the winner.

Start Tile with orane reverse side

Sinscerly (talk) old * 2a. IF you place your tile next to a planet, however, you may then attack the neighbouring planet and position your meeple on this planet (even if another meeple is already there).

A player must first draw a galaxy tile from one of the face down piles. They may show it to all players (who may advise of “good” placement opportunities), and then place it according to the following rules:

Once a player has placed a tile, they may place a meeple. The following rules apply:

If a player has no meeples in their supply, they must continue to place tiles on their turn even though they cannot place a meeple. Do not worry: meeples return to their players’ supplies when they are no longer needed on their respective trading route, asteroid field, and planet (further explained later).

3. Time for a battle

This part of the round only start when there are two or more meeples involved in one realm (trading route, asteroid field or planet), a battle will take place immediately. A battle will always take place before the calculation of points. Even if the player who merged the realms is not involved in the battle.

Before going into battle it is good to know what faction you belong. On your character card there is a little faction symbol, this will become important later on when getting dices.

Important! There is a maximum of 3 dices a player can obtain to fight with in a battle!

The battle for trading routes

The battle for asteroid fields

The battle for planets

If a trading route, asteroid field or planet is "completed" by the placement of the galaxy tile, it is now scored.

If there was a battle in the previous action "Time for a battle" the battle scores are also added or subtracted from the points on the scoreboard.

File:Star Wars Ex17 Score50.jpg
ORANGE scores 2 points and moves the scoring meeple from space 49 to space 1. The scoring meeple is laid flat to indicate that the player has exceeded 50 points.

A trading route is completed when its two ends terminate in junctions, planets, and/or asteroid fields, or when it forms a complete loop. Completed trading routes can vary greatly in length (few or many segments).

A player whose merchant alone occupies a completed trading route scores points equal to the “length” of the trading route (number of tiles used). For example, a five-tile trading route is worth 5 points. More examples are pictured below.

An asteroid field is complete when it is completely surrounded by outer space(has no open sides), and there are no gaps within. Completed asteroid fields can vary greatly in size (few or many segments).

A planet is complete when it is surrounded by tiles on all sides (8 tiles).

The player whose conqueror occupies a completed planet scores 1 point for each tile. In addition, if there is on the tile of the planet a faction symbol you score an additional 2 points. (any faction symbol on the 8 tiles positioned around the planet will not be counted, since they are counted in the other realms (trading routes or asteroid fields).

Returning meeples to their owners

After a trading route, asteroid field, or planet is completed, the meeples in those completed realms are returned to their owners’ supplies. These meeples may be used on future turns.

Due to the sequence of a game turn, it is possible to place a meeple and have it returned to you in the same turn.

The game ends immediately after the turn during which the last Land tile is placed. Players proceed to the final scoring.

Unfortunately, Star Wars Carcassonne must come to an end. The good news is that we can now determine a winner. The game ends as soon as one player cannot draw or play any more tiles. Next, a final calculation is carried out and the winner is determined.

As soon as the game ends, there are points remaining for all realms in which there are Meeples: 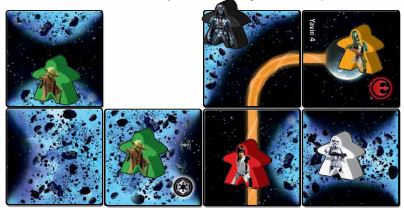 As soon as you have entered the final calculation into the scoring board, the player with the most points will be the winner of your first Star Wars Carcassonne party. Congratulations!

Team variations - may the force be with you

If you play Star Wars Carcassonne with 4 players, you can also play the game in teams. In this case, the players sitting diagonally from each other would form a team, so that the players of the different factions can alternate having turns. The figures are distributed as follows:

Since the players in a team collect points jointly, you can only place one Meeple per team on the scoring board. The extra Meeple in the other colour will be placed back in the box.

The players in a team may never battle each other. A battle will only take place when Meeples from different factions stand on the same realm. During the battle, only one player per team will roll the dice. He may use 1 dice for each Meeple in his faction. As usual, he will obtain additional dice for a large Meeple and for his own faction symbol. Teams may only combat with a maximum of 3 dice per team, however. The course of the game is identical to that of a normal game, otherwise.