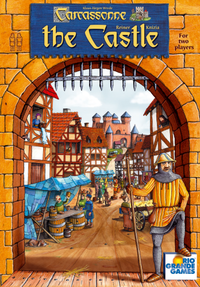 Originally released by Hans im Glück in 2003, Carcassonne: The Castle is an exciting tile-laying game for 2 players, ages 8 and up. Designed by Reiner Knizia. A Polish version, Zamek, was published in 2020 with new artwork and some feature changes, by Nasza Ksiegarnia.

"The imposing silhouette of the city of Carcassonne sits like a throne in the light of the setting sun. Knights guard the towers, the squires live in houses, merchants loudly tout their wares, and the heralds carry the news throughout the city. Over all this bustle, the high castle looms behind its impenetrable walls."

The Castle is based on many of the elements of Carcassonne, but it is not compatible with Carcassonne or any of the other Carcassonne spin-off games. It is also unique in that the game starts by building the castle walls (which form the scoretrack) with the game tiles being laid out within those walls.