This expansion was originally released for the first edition, known as C1 for short, in 2012.

A vast array of roads surrounds the realms of Carcassonne. New ferries along these roads alter paths, providing new opportunities to any of your enterprising thieves.

Tile with a lake

Shuffle the new landscape tiles with those of the basic game and stack them normally. Place the ferries within easy reach of all players.

When a player draws a tile with a lake, he or she plays it according to normal rules.

You may now place a meeple on the lake tile according to the usual rules. If you choose to do it on a road, you must place the meeple on one of the 3 or 4 road ends on the lake tile. Then take a wooden ferry from the supply and place it on the lake so that it goes from one jetty at a road end to another. [2] [3] The ferry will now connect the ends of the road via the two jetties to form a continuous road. A jetty without ferry ends a road. 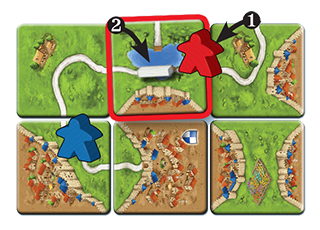 Example 1: ❶ You place the tile with a lake and your meeple as a highwayman.
❷ You place the ferry so that your road now connects to the one with the blue highwayman on it.

When you place a tile with a lake on it, if you complete one or more features, these features are scored normally. 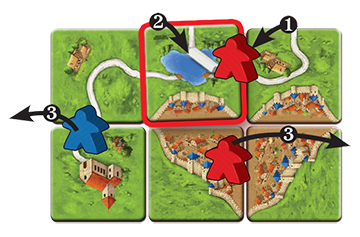 Example 2: ❶ You place the tile with a lake, place a meeple and
❷ then place a ferry, completing both the road to the left and the city.
❸ Blue gains 3 points, you score 8 points, and both players return their meeples to their respective supplies.

After a ferry is placed, its position on its lake can change during the game:

Extending a road with ferries and repositioning ferries

If you use a tile to extend an open road leading to a ferry, you may now (if necessary after placing a meeple) reposition this ferry on its tile. [5] You must connect two road ends (ending at a jetty) again. You may also move the ferry so that it no longer has a connection to the road you just extended. Starting from the tile you have placed, you may only move the first ferry along the road. [6]

Special case: If the tile just placed extends several roads leading to a ferry, you may reposition the first ferry on each of these roads.

By repositioning ferries, it is possible for a road that was previously completed and scored to now be incomplete. [7] [8]

More rules: You may only reposition a ferry only once per turn. If you place a lake tile on a road with a ferry, you first place your meeple, then you place a new wooden ferry, and finally you can also reposition one or (possibly) several ferries on the roads just extended, if any. 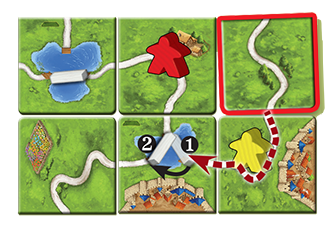 Example 3: You place a tile, extending a road with a ferry on it. You move the ferry from ❶ to ❷. You and the yellow player no longer have meeples on the same road.

If roads from the placed landscape tile extend in several directions, the first ferry in each of these directions may be moved. Thus up to 4 ferries could be moved.

The following diagrams explain the movement of multiple ferries after placing a tile. Figures based on the original ones posted on BGG by Christof Tisch. 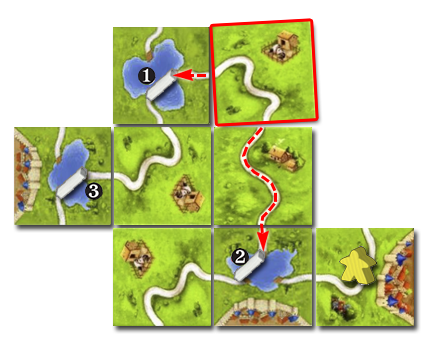 Example 4: If You place the tile, you can move ferry ❶ and ❷. You cannot move ferry ❸ since it is not the first ferry from the, just-layed, tile. The yellow meeple has no impact on the ferries in this example. 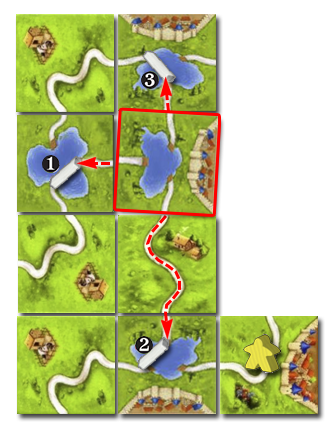 Example 5: If You place the tile, you place a ferry on it. Then you can move ferries ❶ and ❷ and ❸ since all of them are the first ones on the roads that has been made longer. How you place the ferry on the just-placed tile does not influence which ferries can be moved.

When playing The Ferries, the turn sequence is now as follows:

Note: The tile distribution has changed in C3. One of the former lakes with three roads (an FRRR tile) has become a second lake with 4 roads (an RRRR tile).