Originally released by CundCo in 2016 to mark the 15th Anniversary of the first publication of Carcassonne. 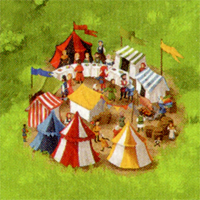 Shuffle the 10 Festival tiles together with the Land tiles of the basic game.

When you draw a Land tile with the festival place, you place it according to the normal rules.

You may then choose either:

The player can also choose to do neither of the above. Note that you are not allowed to place a meeple on the Festival itself.

Captured meeples (from The Tower expansion) cannot be returned to the player's supply in this way.

When you complete one or more areas (e.g. a monastery, a road etc.) by placing a Festival tile, you score them according to the normal rules.

There is no additional scoring at the end of the game with the Festival tiles.