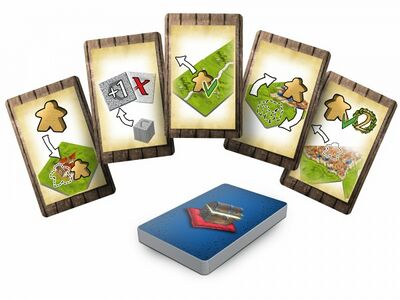 Image of The Gifts

The Gifts was released by Hans im Glück in 2021.

With this mini-expansion released for the 20th anniversary of Carcassonne, you can receive gifts if you help your fellow players.

Note: The expansion does not include printed rules. They can be downloaded from the product here in German and in English:

Shuffle the 25 gift cards into one facedown deck.

This expansion only changes the course of action in step 1. Placing a tile. The following actions 2. Placing a meeple and 3. Scoring a feature are carried out as usual.

If you place a tile in a way that it adds to a road or city of a fellow player, you receive a gift.

Now draw the top card of the deck, take a look at it (without showing it to any other player) and place it face down in front of you.

Note: In case all gift cards have already been given out at this point, shuffle the discard pile into a new gift deck. If the rare case occurs that all gifts are lying "unopened" before the players, you do not receive a gift. 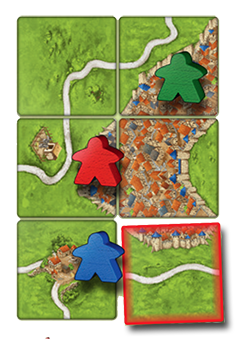 Example 1: You place your tile, adding to Blue’s road and take a gift for doing so. Without the blue meeple on the road, you would not receive a gift, because you share the majority in the city.

To do so, turn over one of your gifts, resolve the action, then put it onto an open discard pile. [5]

There are 5 types of gifts:

When you place a tile, you may place a meeple on it according to the usual rules.

When you complete one or more features (e.g. a monastery, a road etc.), you score them according to the usual rules.

At the end of the game, you score 2 points for each unopened gift in front of you.