Goldmines (Mini #4) was originally released by Hans im Glück in 2012.

GOLD! The excitement is great and many are coming to claim the precious metal for themselves. All accounts will be settled at the end.

When a player draws a tile with a gold symbol, he or she plays it according to normal rules. Then the player must put a piece of gold on both the placed tile and one adjacent tile (diagonal is allowed). Thus, 2 gold pieces are placed for each gold tile played. A player is allowed to put a piece of gold on a tile that already has one or more gold pieces from a previously placed landscape tile. A piece of gold is never associated with a particular feature, but always applies to all features on a tile.

After gold placement, the player may still place a follower according to the normal rules.

If the tile with the gold symbol completes a feature after placing the tile, the feature is scored as usual.

Additionally, when a feature is finished and there are one or more pieces of gold on the tiles of that structure, these gold pieces are awarded. The player with the majority of the completed structure receives all gold pieces from the corresponding tiles. A road and a city include all tiles on which road segments or city segments are located. A cloister includes the cloister tile itself and all 8 adjacent tiles. [1] [2] [3] 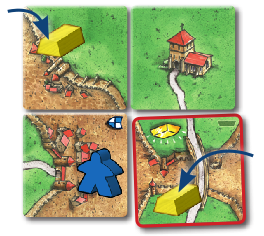 BLUE places a tile with a gold icon. He places a gold piece on that tile and one on a neighboring tile. 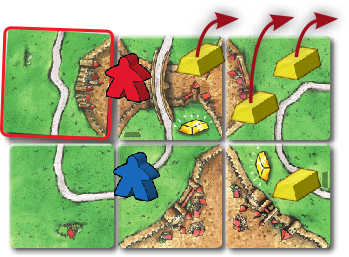 RED completes his city and takes the three gold pieces from the city tiles.

When placing a tile and distributing gold pieces, proceed in the following order:

When more than one player has the majority in a finished structure when gold is to be claimed, or when several structures with a claim to gold are completed at the same time, the gold pieces are distributed among those claiming players. Distribution proceeds clockwise, starting with the active player, until all of the corresponding gold pieces have been awarded. [4] [5] 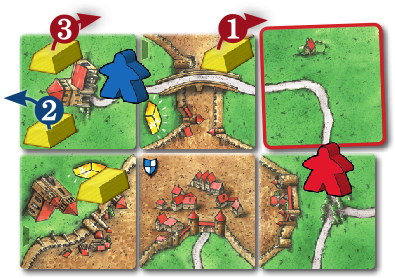 RED placed the tile and completed the road. RED and BLUE have rights to the gold on the road tiles. As active player RED takes first gold, then BLUE, and finally RED last.

When the game is over, all gold pieces which are still on landscape tiles are removed from the game.

The more gold pieces a player has collected, the more each individual piece of gold is worth, as per the following table

In each mini, you will find a tile of the 7th mini expansion Crop Circles. This expansion is playable with only a single tile, but it is best to play with all 6 tiles. [7]