The Markets of Leipzig

Originally released by Hans im Glück in 2017 on occasion of Leipzig's fair "model-hobby-spiel" 2017, with two double tiles for Amazonas.

This expansion was first released as a limited edition of total 600 examples: the first 300 at the "modell hobby spiel" in Leipzig from 29th September to 1st October 2017, and the second 300 at the Spiel'17 in Essen from 26th to 29th of October 2017. This limited version was signed by Klaus-Jürgen Wrede and the CEO of Leipzig's trade fair center (Messe Leipzig) and contained 13 Followers/Meeples.

If possible give an extra meeple to each player as meeples might run low easily in this variant. 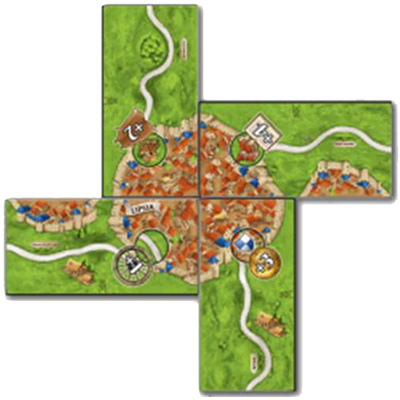 3. Scoring a feature and sending a meeple to Leipzig 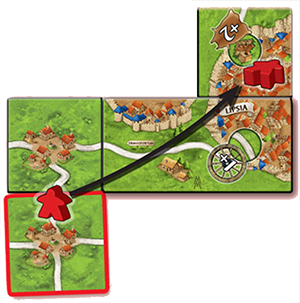 3. Scoring a feature with meeples in the Markets of Leipzig

When you have a meeple in a quarter of Leipzig it will score you bonus points in specific scoring phases - either during the game, or at the end. [8]

Question: The road on a City of Leipzig tile has to be counted as 2 points instead of 1 because road is on two "spaces"? The rules mention it is scored as one road segment... Does this still apply? Or should it be scored as two "spaces"?

Answer: The rule does apply, therefore you still score only 1 point.
But for every other scoring, it is considered as 2 tiles (German monasteries, dragons etc.) (1/2021)

Question: So the dragon for example affects the whole tile (except the interior of the Leipzig in this case) but considers each space individually when moving.
The same would happen to a tower range.

We will include some remarks about the implications of these clarifications next.

>> Base game - Road and Cities

In general terms, roads and cities are scored taking into consideration the square spaces occupied by the tiles conforming the feature. Double-sized tiles occupy two spaces but they pose no issue for cities due to their current configurations (they only present one semicircular city segment at most).

However, the Leipzig tiles present a special case for roads. The road segments on them occupy two spaces but they are scored as one road segment (one space) as indicated in the rules of this expansion.

Edge case example: The road segment on any Leipzig tile occupies two square spaces but it is counted as one road segment tile for scoring purposes.

>> Base game - Monasteries and abbots

Note: The same considerations should be applied when removing and scoring an abbot, and the scoring of all other monastic buildings: abbeys, shrines, German monasteries / Japanese Buildings / Dutch & Belgian monasteries with monks, Darmstadt churches.

The dragon may be placed on a Leipzig tile but it won't affect any meeples placed inside the city, since it is a special area (the same as the City of Carcassonne in Exp. 6 - Count, King & Robber).

A tower may not capture meeples in Leipzig, since the quarters of the city are considered a special area, as clarified for the dragon.