The Phantom is the only expansion to date that is completely edition independent, in that it can be used with both First Edition and Second (and Third) Edition Carcassonne.

Every player receives the phantom of his or her color - the purple phantom belongs to the grey player (First Edition), or the pink player (Second and Third Editions).

There are no tiles supplied with this expansion. 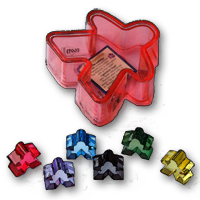