The Princess and The Dragon

Main Page ✎  > Carcassonne ✎  > The Princess and The Dragon 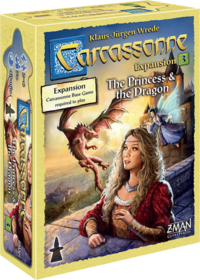 Enter a realm of chivalry and sorcery with this Carcassonne expansion. The Princess sends knights out to perform acts of chivalry; meanwhile, a fearsome dragon threatens meeples unprotected by the magic of the fairies! The Princess & the Dragon expansion introduces princesses, dragons, fairies, and other storybook elements that add surprising wrinkles to your Carcassonne game. You can use thirty new tiles to unleash a dragon that devours anyone in its path, summon a fairy to protect your meeples, or remove rival knights from a city. No matter what tile you draw, you’ll have plenty of options to disrupt your opponents’ plans and claim more points for yourself.

All in all, this expansion introduces you to the world of fantasy, the land of fairy tales and where knights fight big dragons with the following new features: 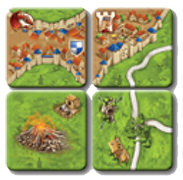 Shuffle the new landscape tiles in with those from the basic game and stack them normally. Place the dragon and fairy to the side for now – they do not belong to any player.

The dragon: volcano and dragon symbols [4]

Note: No meeple (or figure in the dragon's menu - see below) may share a tile with the dragon. [6]

The volcano symbol has no effect on scoring.

You may place a meeple on a Dragon tile, unlike Volcano tiles. [7] Then the dragon moves.

Starting with the active player and proceeding clockwise, players take turns moving the dragon one space at a time (vertically or horizontally) until the dragon has moved 6 spaces or is unable to move.

The dragon may not move to a tile that it has already visited this turn. It also may not move to the tile the fairy occupies (see below). Whenever the dragon moves to a tile occupied by one or more meeples (or other figures), it eats those meeples (or figures), which are returned to their respective players. After the dragon has finished moving, it remains where it is on the board until the next Volcano or Dragon tile is played, and the game continues as normal. A list of figures the dragon does and does not eat can be found below.

Dead end: If the dragon is unable to move (it is only adjacent to tiles it has already visited), its movement ends prematurely. 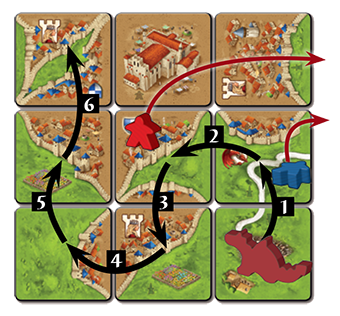 The following list illustrates what the dragon does or does not eat. [8] You are welcome to skip them for now and refer to them as necessary.

2b. The dragon's menu (what the dragon eats)

Rule of thumb: The dragon eats all that is flesh and blood!

2b. The dragon's diet plan (what the dragon does not eat)

The dragon is afraid of the fairy. Besides, the dragon won't eat anything in the following list.

2b. Protection against the dragon

Figures in the following places are safe from the Dragon

The dragon symbol has no effect on scoring.

Question: What happens with the dragon after it finishes moving?

Answer: The dragon moves to the new volcano.

Question: May a player who places a dragon tile, and doesn't deploy a meeple, move the fairy to one of their own meeples before the dragon moves?

Answer: Yes! It's a big advantage, but the rules allow it.

Question: A dragon tile triggers the movement of the dragon. When does it happen in the turn sequence?

Answer: The dragon will move right before scoring.

There are 6 princess tiles. Princess tiles are placed exactly like those in the base game. If a Princess tile continues a city occupied by one or more knights, you may remove one knight of your choice (even your own) from the continued city and return it to its player's supply. [16]

Question: Does the Princess symbol affect both city segments on this tile or just the one with the symbol?

This tile has two different city segments, that is, 2 separate cities. Only the city segment with the Princess symbol will allow a player to remove a knight.


In case this tile is placed connecting both separate city segments to one larger city, the Princess may remove any knight in the resulting city. 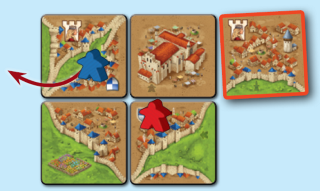 Example: You place a Princess tile and remove the blue knight from the city. You may not place a meeple this turn.

The princess does not affect scoring.

There are 6 tiles with magic portal symbols. Place a tile with a Magic Portal in the usual manner.

After placing a Magic Portal tile, you may place a meeple on that tile or on any other previous placed tile. When doing so, you must follow all other placement rules. For example, you may not place a meeple in an already occupied or completed feature. [18] [19]

Example: You place a Magic Portal tile on the left, but place a meeple in the unoccupied city on the right.

All figures that are used like meeples (normal meeples, abbot, large meeple, mayor, wagon, ringmaster, and phantom [20]) may be placed via the magic portal.

Question: If you place a magic portal tile, could you use it to send a meeple as a farmer to a closed field?

Answer: Since fields are never completed, you can use other mechanics to place a meeple in a field (magic portals, crop circles...). (1/2021)

The Magic Portal does not affect scoring.

Question: If there is a completed feature that no-one scored for, for example a monastery that was never occupied, or a city where the all the knights were eaten by the dragon before they would score, then can I use a magic portal to occupy it and score for it?

Answer: No. The magic portal rules state that you cannot place a meeple on a completed feature. This applies even if no-one scored for it.

Question: Can I use a magic portal to place a meeple onto a volcano tile?

Answer: If the Dragon has left the tile: Yes.

Question: Can I use a magic portal to place a meeple onto the tile where the dragon is?

Answer: No, the dragon feasts on all meeples on the tile. His appetite is insatiable. This is the reason why a player isn't allowed to place a meeple when placing a volcano tile.

The fairy is a neutral figure that belongs to no player. It begins the game in the supply.

On any turn in which you do not place (or move) a meeple, you may assign the fairy to one of your meeples by placing the fairy directly next to it.[21]

When the fairy is standing next to one of your meeples, it can help that meeple in 3 different ways:

If the fairy is still assigned to your meeple at the start of your turn, you immediately score 1 point.

The dragon may not move to a tile occupied by the fairy. All figures on the fairy's tile are protected from the dragon's hunger. 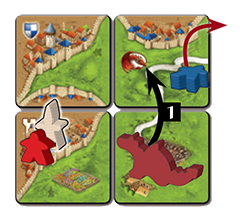 Example 1: The dragon moves. Because the fairy occupies the tile to the left, the dragon may not move there and moves up instead.

When scoring a feature (city, road, monastery, field, etc.) where the fairy is assigned to one of your meeples, you score 3 points, regardless of whether or not you score points for the scored feature. [23] [24] Your meeple returns to your supply, as normal, but the fairy remains on its tile. 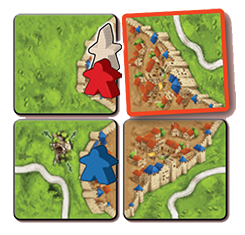 Example 2: Blue places a tile and completes the city. Blue scores 8 points. You also score 8 points, plus 3 bonus points for the fairy, for a total of 11 points.

Question: If I complete an area that I already own and don't place a meeple, can I move the fairy to my existing meeple and score the 3 fairy points on the same turn?

Answer: Yes, moving the fairy takes places before scoring.
Note: You would score the fairy bonus even if you don't have the majority in the feature.

Question: May a player who places a dragon tile, and doesn't deploy a meeple, move the fairy to one of their own meeples before the dragon moves?

Answer: Yes! It's a big advantage, but the rules allow it.

Question: If the fairy is next to a knight (a meeple placed in a city), does it provide any protection against the princess tile?

Question: If a princess tile completes a city with one meeple previously placed in it with the fairy, does the player receive the 3-point fairy bonus for the completed city?

Answer: No, you would need a meeple in the city to score it, or to get the fairy scoring bonus.

Answer: When placing a princess tile, the fairy can be moved if no knight is removed and no meeple is placed on the tile.

Additionally, if the volcano tile extends...

Question: If I have more than one meeple on a tile (one could have been added to a tower, or placed on a different feature on the same tile by a magic portal), then does the dragon eat them all if it visits that tile?

Answer: Yes. It is a big dragon!

Question: If you place a dragon tile and add a piece to a tower, what happens first: meeple capture by the tower, or dragon movement?

Answer: Prisoners are taken first; placing a tower piece is an alternative to deploying a meeple, so occurs before dragon movement.

However, if the princess tile extends...

Question: If the dragon can eat a meeple on a tower, can the meeple also be seduced by a princess?

Answer: When a challenge is resolved (that is, when someone has won), both meeples are returned to their players, so no one stands next to the fairy. [At the point that a challenge is resolved and one participant "scores" zero, the building that participant is in will be incomplete. Therefore, strictly speaking, that participant does not actually take part in "scoring" —say, in the way that a player without the majority in a city does—and so does not score the bonus points— ed.]

x1
Several tiles have a small illustration on them. The letters in brackets show which illustration is on each tile:

D | Donkey stable
Note: The small illustrations of a cowshed, a pigsty and a donkey stable are collectively referred to as sheds or stables.