Promotional image of The Signposts

The Signposts was released by Hans im Glück in 2021.

With this mini-expansion you can score additional points when you finish a street. To do this, you have to steer the course of the road as the signposts show you. 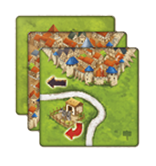 Shuffle the 12 tiles of this mini expansion together with the other land tiles.

Draw a land tile and place it according to the rules of the base game.

You may place a meeple on the tile just placed. [1]

When completing a road, check if there are signposts next to it. If that is the case, in addition to the points of the road you also score points for each signpost pointing in the right direction. [2]

There are three types of signposts: left, straight, right.

Example 1: Tile with 2 types of signposts: straight and right

For a signpost to be pointing in the right direction, the following requirements have to be fulfilled:

How to count the signposts:

You do not receive points for signposts that do not show the correct course of the road. 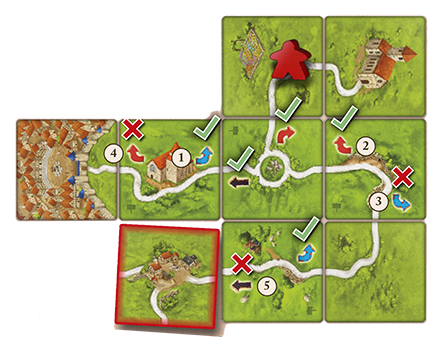 Example 2: In this example, 5 signposts point in the right direction

. The rules for the roundabout are as follows: If a signpost points in one of the two directions of the roundabout, it is showing the correct course of the road (here: the blue 1 and the red 2 arrow).
Three arrows are not correct

. Three are pointing in the wrong direction 3, 4 and/or the road already ends on the next tile 4, 5.
You complete your road by placing the tile and score 9 points.
For the 5 correct signposts

At the end of the game you receive 1 point for each signpost on your roads, pointing in the right direction. The different types of signposts do not matter at this point. 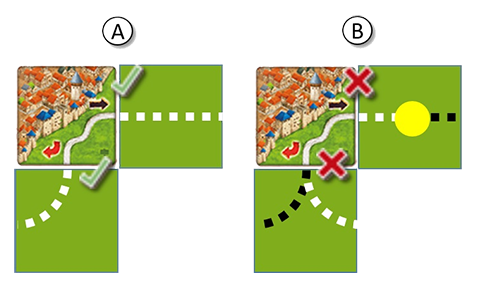 In general terms, the road segment must connect the required edges to meet the conditions, but this connection may happen to include other features that provide this connection on the tile beyond a simple printed road on the tile. 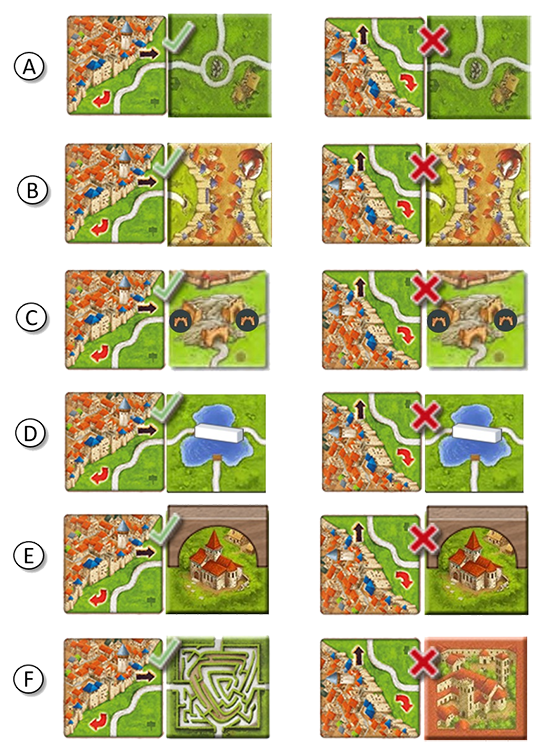 Example 4: Roads may include a number of features affecting them and even modify their layout at times. The rules cover roundabouts (case A). For other features, the same logic should apply also covered in the image:
Case C-right may present many variations when not meeting the signpost condition:
The labyrinth (case F-left) would always meet the signpost condition, the same as the 4-legged roundabouts featured on the Spiel '18 tile (Spiel Promos) or in Exp. 7 - The Catapult. The abbey tile (Exp. 5 - Abbey & Mayor) would never meet the condition (case F-right), the same as any edge with a city gate.

The signpost requirements will apply to roads on Halfling tiles (Halflings) and double-sized tiles (the river source in the 20th Anniversary River, the German castles in Castles in Germany or the tiles in The Markets of Leipzig). 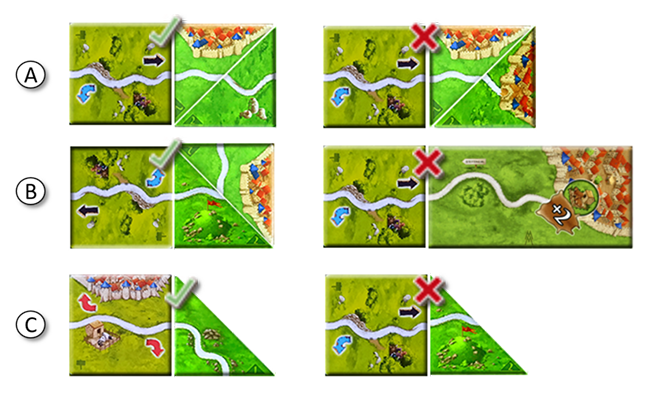 Case B-right shows a road on a Leipzig tile that will not meet the signpost requirement.

Case C-left shows a road on just one triangular tile that meets the condition of the signpost. However, case C-right sows a road not meeting the signpost condition, since it is interrupted at the long edge of the tile, that is, it meets a triangular gap.

These points will be added to the feature after applying other scoring modifiers such as: