The Tower was originally released by Hans im Glück in 2006. The tiles of the first German editions had no expansion symbol.

This is the fourth major expansion for Carcassonne and introduces a new aspect to the game. With this expansion you can build high towers from which you can capture opposing players' followers, and hold them for ransom or wait for a one-for-one exchange.

A Carcassonne expansion is not really a Carcassonne expansion when there are no new tiles, so in the box you also find 18 tiles that represent city segments, road segments and cloisters in new configurations plus the addition of tower foundations which will help create much more than a beautiful landscape.

The 18 tiles should be mixed with the rest of the tiles.

Each player receives a number of tower pieces, according to the total number of players.

The new land tiles are placed in the usual way. Apart from the tower foundations, there are no new elements on the tiles. 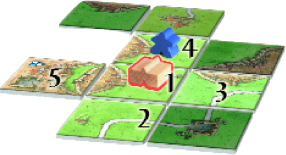