The Watchtowers was released in 2016 by HiG through CundCo.

This mini expansion features watchtowers that you can build in and around Carcassonne. Each tower watches over different things and is more valuable the more it watches over.

Tile with a watchtower

Shuffle the 12 land tiles showing the watchtowers together with those from the base game.

When you draw a land tile showing a watchtower, place it according to the known rules.

After placing a land tile showing a watchtower, you may place one of your meeples on the tile according to the normal rules. You may place it on a city or a road, or in a field as a farmer. You may not place it on the watchtower itself.

Example: You place a tile showing a watchtower and place a meeple in the city. You may not place it on the watchtower though.

This does not apply to farmers. Farmers do not trigger scoring for watchtowers. [5]

For scoring the watchtowers, the 8 directly adjacent tiles and the tile with the watchtower itself are considered. You can see on each watchtower what scores you points:

The following examples show how watchtowers are scored: 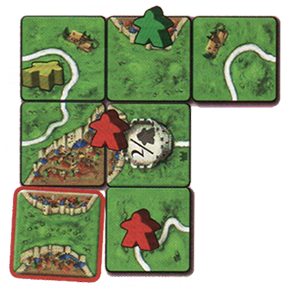 Example 1: Your city has been completed. First you score 8 points (4 meeples x 2 points) with the watchtower. Then you get 6 points for the city. 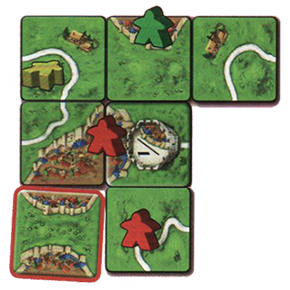 Example 2 - Same situation with a different watchtower: you score 4 points with the tower (4 tiles showing a part of a city x 1 point) and then 6 points for the city itself.

Watchtowers do not provide points after the game. [11]