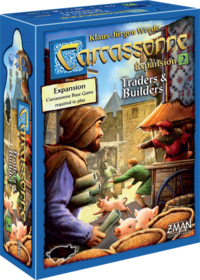 This expansion introduces new tiles as well as goods tokens. These tokens are collected when completing cities and scored at the end of the game. Two new figures are also introduced:

Shuffle the new landscape tiles with those from the basic game and stack them normally. Place the goods tokens as a general supply within easy reach of all players. Each player adds the builder and pig of their color to their supply.

The goods tokens play a role in phase 3. Scoring a feature. Phases 1. Placing a tile and 2. Placing a meeple are not affected by them.

Scoring a feature with goods symbols
Whenever you or another player completes [2] a city featuring goods tokens, the following occurs:

Example: You complete the city. The blue player scores 10 points for scoring the city. You receive 1 wine and 2 wheat tokens.

The builder is a special figure that belongs to each player.

The new Land tiles are placed exactly like those in the base game. The builder has no impact on tile placement.

Instead of placing a meeple [3], you may place your builder on the tile you just placed, but only on a road or city. Note that you must already have one meeple on the feature in order to place a builder there. [4]
Your builder is always returned to your supply if you no longer have meeples on that feature. This typically occurs after the feature has been scored, but some expansions introduce other ways in which this can happen.

Example: You may place your builder on the road tile you just placed, because you already have a highwayman on it.

Later on in the game, the builder has the following effect:

1. Placing a tile and getting a double turn

If you place a tile that continues [5][6] the road or city that your builder occupies, you may immediately draw and place another tile.[7] You must still follow all the normal rules while placing this tile. 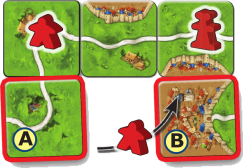 Example:
A) You place this tile, extending the road your builder occupies, but decide not to place a meeple.
B) Continuing the same turn, you draw and place another tile, and place a meeple on it.

More information on the builder
(These are special rules. So it's recommended that you read them only if you have any questions. All explanations apply to cities as well as to roads.) 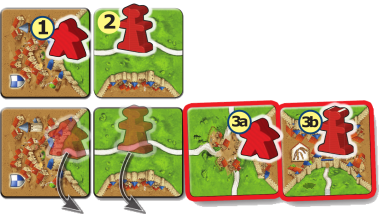 Example:
Turn 1: Place a highwayman.
Turn 2: Place your builder.
Turn 3a: You complete the road by placing this tile, on which you also place a knight. Then, you score the road, and return your builder and highwayman to your supply.
Turn 3b: You place your second tile and your builder.

The builder has no impact when scoring a feature. Builders are never counted when determining who has control of a feature. Your builder and your meeples are all returned to your supply (as well as any other players' builders or meeples) when the feature they occupy is scored.

The pig is a special figure that belongs to each player.

The new Land tiles are placed exactly like those in the base game. The pig has no impact on tile placement.

Instead of placing a meeple, you may place your pig on the field segment of a tile you just placed. However, that field must also contain at least one of your farmer meeples.

Example: Since you have a farmer in this field, you may place your pig in it.

You may place your pig even if another player's pig is also in that field.
If your pig, due to removal of farmers (which is possible with some expansions), is left standing during the game in a field where none of your farmers are left, return it to your supply. [10]

Note: Your pig will still increase your score, even if you and another player are tied for control of the field with your pig.

Instead of placing the Land tiles in multiple facedown stacks, you can simply put them all in the bag. On your turn, simply draw a tile from the bag and then place it as usual.

The bag is also well suited to carry Carcassonne with you.

Things that happen only ONCE

Things that may or must happen TWICE