Traders and Builders was originally released by Hans im Glück in 2003.

This is the second major expansion for Carcassonne and introduces a few new aspects to the game. They introduced some new tiles that brought new things with them.

The 24 tiles should be mixed with the rest of the tiles.

The new land tiles are placed in the usual way. Take care with the following tiles: [4]

The bridge is not a crossing. One road runs continuously from left to right, while the other runs from top to bottom. However, the field segments are separate. The tile has four separate field segments.

One road ends at a city, the other at a house. The tile has three separate field segments.

The cloister divides the road into three segments.

Instead of deploying a normal or big follower, a player may now decide to deploy their builder or pig. These are deployed according the following rules.

Effect: Whenever the player places a tile that extends [5] [6] [7] the road or city which includes their builder, they may take a double turn. [8] [9] Here, after performing the usual steps of deployment and scoring, [10] the player draws another land tile, places it appropriately, and may then deploy another follower and carry out any necessary scoring. [11]

The player’s turn is then over.

For example a player may:
1) Deploy a thief
2) Deploy the builder
3a) Continue the road
3b) Draw a second tile and place it somewhere

Important notes regarding use of the builder and the double turn:

For example, a player may:
1) Deploy a thief
2) Deploy the builder
3a) Complete the road and place a knight in the city segment of the tile. The road is now scored—the thief and builder are returned to the player
3b) Place the second tile and deploy the builder

Deployment: The pig can only be deployed to the tile which has just been placed, and then only to a farm which already contains one of the player's farmers.

Effect: The pig increases the value of cities for the farmers.

A city with trade goods is completed

When a city containing one or more trade symbols is completed, the city is scored as usual. The player who completed the city receives one trade counter for each related trade symbol in the city - this player is, so to speak, the trader of the city. It is irrelevant whether this player had a knight in the city, or indeed whether there were any knights in the city at all. [17] 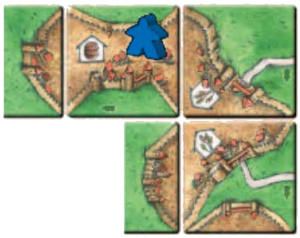 The player who has collected the most wine counters scores 10 points. The same is true for the player with the most grain counters and the most cloth counters. As usual, in the case of a draw all players involved score the full 10 points.

Example for a game with two players: BLUE scores 20 points, while RED scores 30.

Pigs on a farm

A player with his or her pig on a farm scores 4 rather than 3 points for every completed city.

Things That Happen Only ONCE

Things That May or Must Happen TWICE

Players are allowed to keep drawing additional tiles as long as they extend their city/road where their builder is deployed. (Thanks to Diminuendo)

To bring the trade goods in line with the relative scoring of the King and Robber Baron (Count, King and Robber), a player with a majority no longer scores 10 points. Instead, they receive a 10% bonus (or 10 points, whichever is higher) to their total score at the end of the game, after calculating farms and incomplete features, but before calculating any other scores such as those from the King and Robber Baron. Additionally, any player who does not win the majority may be awarded 2 points for every token they own. (Thanks to kissybooboo)