Visual Changes in the 2nd Edition

The Second and Third Editions of Carcassonne share a similar visual style. These editions represent different milestones since the visual restyling of the game 14 years after its release. This new graphic style has also varied through the years, as you can see below.

The Second Edition of Carcassonne (or C2 for short) has undergone a few changes in style since its release in 2014. These minor graphic changes do not affect the playability of the game but the visual appearance of the board when combining tiles from different editions or styles. 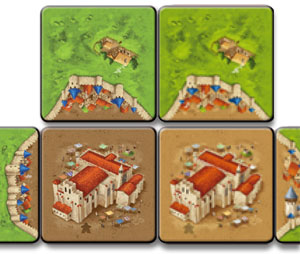 The first printed versions of the Second Edition of Carcassonne (2014-2016) featured a darker brown colour to the base for the cities. This was also used for the first two major expansions (Exp. 1 - Inns and Cathedrals, and Exp. 2 - Traders and Builders) as well as some of the promotional items available at that time. [According to several posts on Carcassonne Central Forum] KJW requested that this be lightened, and since then all new releases (from Exp. 3 - The Princess and the Dragon onwards), and subsequent re-printing of the base game and the first two expansions, have featured the lighter coloured cities. 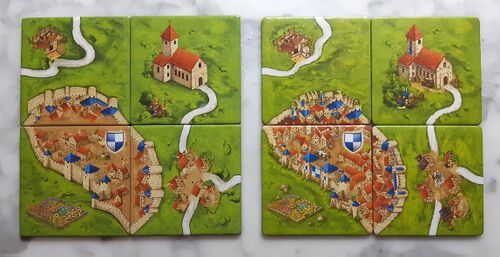 Example 1: This picture compares city tiles from the base game (left) and cities with clipped buildings from the 20th Anniversary Edition (right).

Since 2020, the new releases kicked-off the Third Edition of Carcassonne (or C3 for short) with a few exceptions. This new edition changed their tile shape and graphic style, the latter affecting cities most noticeably:

Previously, the Second Edition artwork style featured buildings distributed more sparsely in cities. They would be near the edge of the tile but never overflowing it.

Example 2: This picture compares the tile corners from the base game (left) and the rounder ones from the 20th Anniversary Edition (right). The rounder corners create a bigger gap at the intersections that dissimulates the city wall interruptions caused by city-city corners.

Items known to have been produced with this new style: