This page is
Under construction

The Abbot was originally released by Asmodee France, Fantasmahoria and Lineart in 2022 as part of the third Winter Edition, called WE3 for short.

It introduces the abbot meeple and garden features.

The Abbot ✎ is considered part of the basic game that can be used as desired. It implements the same mechanic which was added to the Base Game, beginning with the second edition.

Each player adds the abbot of their color to their supply. With the exception of the new rules used with this mini-expansion, all basic Carcassonne Winter Edition rules remain unchanged.

When placing a tile with a garden, you must place it so that its edges match the edges of tiles already in play.

3. Scoring with the Abbot

When the monastery or garden occupied by your abbot is surrounded by eight tiles, you score 9 points (just like a regular monastery scoring).

On your turn, if you do not place a meeple during the 2. Placing a meeple phase, [1] [2] you may instead return your already-placed abbot to your supply. If you do so, you score immediately as many points as the garden or monastery your abbot occupied is worth at that time, [3] exactly like how monasteries are scored during the final scoring. 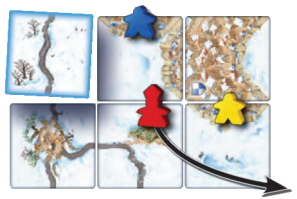 You place this tile, but choose to not place a meeple. Instead, you return your abbot to your supply, which you placed on a previous turn. You score 6 points (1 for the garden, and 5 for the tiles surrounding it).

During final scoring, incomplete monasteries or gardens occupied by abbots are scored the same way as those occupied by monks.

The following tile distribution includes all the tiles featuring a garden that can be found in the Base Game and the expansions released until now (12/2022) for the Winter Edition (WE3 only).

Base Game WE3 ✎