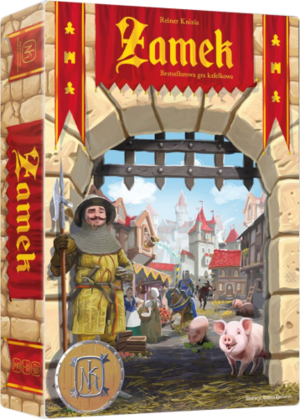 Zamek was published in 2020 in Polish by Nasza Ksiegarnia. It is a complete reworking of The Castle with new artwork and some feature changes.

Two families compete for control of the castle within which the game takes place. By adding tiles, you create a network of roads, meadows, houses and pigsties, over which you try to take control. Heralds, monks, squires and farmers will help you take control of the castle's buildings and earn points. You will also receive points for two items that must be present in every good castle: shrines and shackles. At the end of the game, the person with the most points takes over the castle and puts his rival in the stocks. 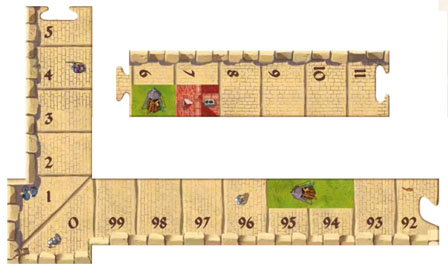 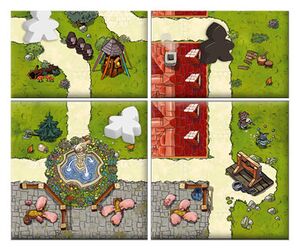 The following are the main feature changes between The Castle and Zamek.

Objective of the game

Two families compete for control of the castle within which the game takes place. By adding tiles you create a network of roads, meadows, houses and pigsties, over which you try to gain control. You have to make clever use of your subjects - heroes, monks, squires and farmers - they will help you take control of the castle's objects and earn points.

You'll also receive points for two items that must be present in every decent castle: shrines and stocks. At the end of the game, the person with the most points takes over the castle and puts his rival in the stocks. 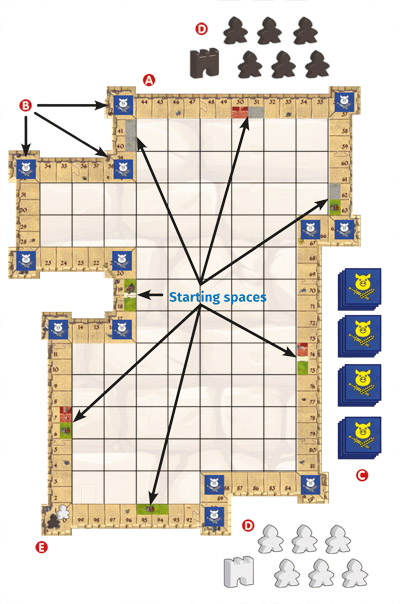 (A) Arrange the wall tiles as shown. The wall forms a scoring track (from 0 to 99). It is the border of the playing area. Note that several tiles on the wall have starting spaces.

(B) Place the 18 special tokens face down on the table and shuffle them. Then place 1 token on each defense tower (except those with spaces 0 and 1). Put the unused tokens back in the box (without peeking).

(C) Place 60 tiles on the table face down and shuffle them. Then make several piles of them and place them outside the castle walls.

(D) Take 1 family house and 6 followers of the chosen color and place them in front of you.

(E) Each player places 1 follower on the zero space of the scoring track.

The game is started by the person who was last in the stocks (or the older player). On his turn, a player may take 3 actions in the following order:

The player takes 1 tile from any stack and places it within the walls according to the following rules:

One of the Starting Spaces

2. Placing a Follower into the Castle

On the just-placed tile the player may (but is not required to) place one follower from his or her supply. If the player doesn't have any more followers in his supply, he skips this action. When placing a follower in the castle, the player may place the follower on one of the areas on the currently placed tile: the house, the pigsty, the road or the meadow. Depending on where the follower is placed, it will have a different function.

If a player has no followers in his supply, he does not send a follower to the castle on his turn. However, when a follower returns to the player's supply during the game, the player may use it again.

Fight for control of the areas

An added tile enlarges a road, house, pigpen or meadow. If there is already a follower (of any player), the player cannot send his follower to that area.

Remember, it doesn't matter how many tiles away a follower who is already in an area is - he controls the entire area and no player can add another follower there.

An added tile may cause player-controlled areas to merge. If this happens, the player cannot send his followers to the connected area, and followers in the merged areas remain in their positions. 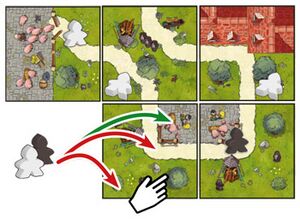 Example:
The player has added a tile with a pigsty, a road and a meadow.

So the player can send his farmer there.

If the added tile has completed building a road, house or pigsty, the points scored are counted. The completion of the construction means that the area is closed and cannot be extended any further. You mark the points scored by moving your followers on the score track.

Remember that the points for completed areas apply to the road, house and pigsty, but not to the meadow! Meadow points are awarded at the end of the game (which is why monks lie in meadows waiting for the game to end).

Points for a completed area are scored by the player with more subjects in that area. In the event of a tie, no player scores points.

Remember, it doesn't matter which player adds the tile causing a road, house or pigsty to be completed. Points are scored by the player with more subjects in the enclosed area.

If both players have scored points for completed areas after the tile was added, the first player to score points is the player whose turn it is. This is important when removing tokens from the track (this will be explained later).

A player with more heralds on a complete road scores 1 point for each tile on that road.

If there are stocks next to a completed road, the player receives not 1, but 2 points for each tile making up that road. More than one stock does not give any additional points! Just one stock is enough to score 2 points per road tile.

A player with more farmers on a completed pigsty scores 2 points for each tile that makes up that pigsty.

The player who has more squires on a completed house scores 1 point for each tile that makes up that house.

Each time a player scores a larger house (consisting of more tiles), he moves the family house there.

At the end of the game, the family house is the largest house for which a player has earned points.

Remember that once points have been awarded for a completed road, house or pigsty the followers standing on them return to their respective players. These followers can be sent back to the castle later in the game in any role: as heralds, farmers, squires or monks.

Example:
To get the special token the white player must score 3 or 4 points. His follower will then stop on space 56 or 57. If he scores more and passes these spaces, he cannot take this token.

A description of the special tokens can be found at the end of the instructions.

After the player has added the tile, placed a follower in the castle, and scored points, the player's turn ends. His opponent takes his turn.

The game ends when all the tiles in the stacks have been used.

The player with the most points scored is the winner. In case of a tie, the players share the victory.

Points for the Family House

Example:
In this case, the largest empty area has 5 tiles. The player with the larger family house therefore scores 5 points. 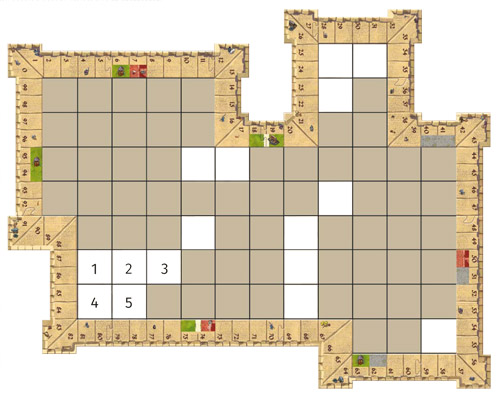