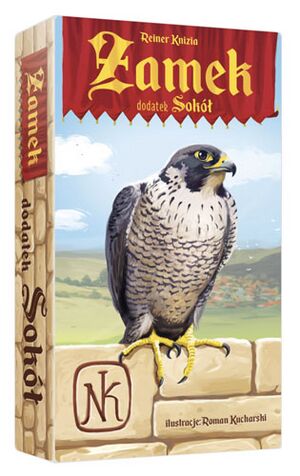 The Falcon Expansion (SOKÓŁ) for Zamek was released in 2022 and is published by Nasza Ksiegarnia.

In the basic version of ZAMEK two families fight for power, trying to take control of roads, meadows, houses and pigsties. The Falcon expansion introduces a new building, the chapel, and new followers, the prince and the falconer. Thanks to them players have new possibilities of gaining points. 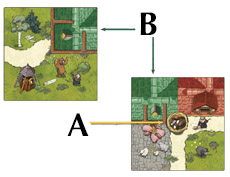 A: Falcon Nests
B. Chapels

This Expansion is only playable with the game Zamek. All its rules apply.

Game preparation is the same as in the basic version of the game with the following changes:

(C) Place the 18 new tiles face down on the table and mix them together with the tiles from the basic game.

(D) Take 1 Prince and 1 Falconer of each color of your choice and place them in front of you, next to the family house and 6 followers from the base game.

(F) Place the falcon nests in a convenient location outside the castle walls.

Note: The rules for Sokol follow the rules for Zamek. Step (B) and (E) are missing from the rules. Step B is the placing of the special tokens on the defense towers. Since that step is not changed in Sokol, it is excluded. Step E is also missing in Sokol because it does not change. Step F is added.

During gameplay, the rules from the base game apply. The new pieces from this expansion introduce the following changes.

When adding chapels, the same rules apply as for houses, pigsties and meadows.

Placing a Follower Into The Castle 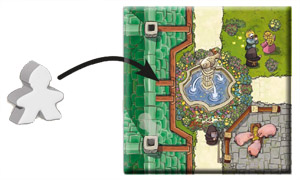 On the tile just added a player may (but is not required to) place one follower from his supply. In addition to the functions described in the basic game manual (squire, farmer, herald, monk) followers have a new function, Preacher, when sent to a chapel.

The Prince and The Falconer

During the game, players also have new followers at their disposal: the Prince and the Falconer. They can be used interchangeably with followers from the basic version of the game and are placed on the added tile.

Note! The Prince and the Falconer cannot be placed on an area of the tile for which the player would immediately score points.

Gates on the Scoring Track 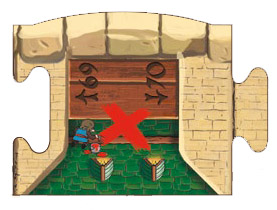 When moving the followers on the scoring track you skip gates. Followers cannot stop there, which is indicated by a red X.

The player who has more preachers in the completed chapel scores points based on the number of tiles the chapel consists of:

After tallying the points for the completed chapel the followers standing on the tiles are returned to their respective players.

The player scoring points for a completed area (house, pigsty, road, or chapel) checks to see if there are falcon nests in that area. If so, the player takes the appropriate number of nests from the pool lying on the side of the table.

Example: In his move, the white player adds a tile to the castle (marked with a red frame) and places a follower on the completed road. He can put a normal follower on the road, but not a prince or a falconer, because the player scores points for the road immediately. Then players check if the added tile made the road, house, pigsty or chapel complete: 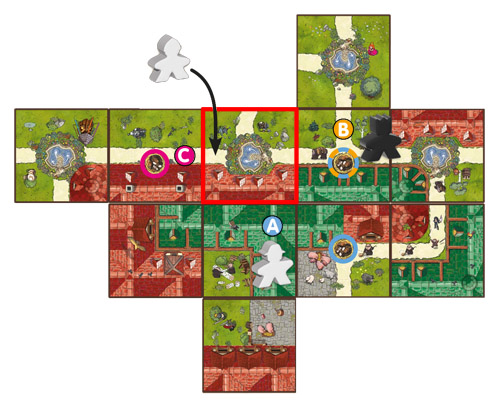 If players have the same number of followers in a scoring area, neither player receives points or falcon nests (even if the followers there include princes and/or falconers).

The game ends when all the tiles in the stacks have been used. In addition to the points earned according to the rules of the basic game, players receive points for falcon nests collected during the game: