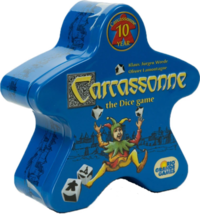 Example 1a - First roll: the player immediately passes the catapult to his left neighbor. The player uses 4 of the dice to build a city. He re-rolls the 2 knights and 2 other city segments in the hope to increase the size of his city.
Example 1b - Second roll: the player immediately passes this second catapult to his left neighbor. With 2 city segments dice, he add to his city. The player cannot use the knight and chooses to end his turn and score the largest city he built.

Example 2a - First roll: the player build a city with 4 dice and set aside the knight die. He re-rolls the other 4 dice
Example 2b - Second roll: the player gets 2 catapults, he passes both of them to the next player and re-rolls the other 2 dice trying to close the city. The 4 dice that already are part of the city and the knight cannot be re-rolled.
Example 2c - Third roll: It is not possible to close the city with the city segments rolled. Dice already being part of the city cannot be moved to new locations. There are two cities, a 2 dice complete city and a 6 dice incomplete city. Neither of the two cities score points. The player receives no points in this turn.