This page contains changes which are not marked for translation. 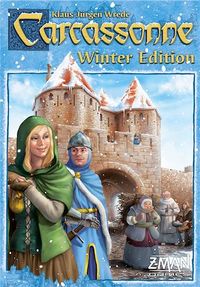 The rules for the winter edition are identical to the normal rules of the game Carcassonne. The 12 additional tiles with animal illustrations are played by the usual rules. [2][3]

Returning followers to their owners

The End of the Game

Only the farmers and their farms are left, and these will be scored now. The owner of each farm must be established. If several players have farmers on a given farm, then the player with the most farmers is the owner. In the case of a draw, all the players with the most farmers are considered to be owners of the farm. The owner (or owners) of the farm score 3 points for every completed city which borders the farm, or lies within it. [20][21]

BLUE scores 9 points (6 points for the upper farmer and 3 points for the lower one).
BLUE scores 6 points. RED scores 3 points. The incomplete city generates no points.
On the large farm RED and YELLOW both have two farmers, and so both score 6 points: 3 each for the cities A and B. BLUE owns the small farm, scoring 3 points for city A.

How can multiple followers stand on one feature?

Turn 1: BLUE places a follower on the field.
The fields are not connected at the corners! Turn 2: RED places the tile at the upper right and places a farmer on the field. He may do this becauase the fields are not yet connected.
Turn 3: Now the two field segments are connected as part of a larger field. In this way it is possible for several followers to be on one farm. In this same way, several thieves can stand on one road or several knights can be in one city.

72 tiles as in the original Carcassonne:

Tiles marked with a star (*) have graphically different versions included in the game.