Originally released by Hans im Glück in 2014 at Essen Spiel, The Sheriff is a mini-expansion for Carcassonne: Gold Rush. 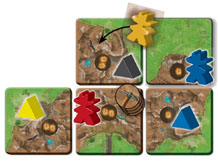 The player who places (or moves) the Sheriff must now take one mining token from each other player with a Tent on the Mountain and immediately return them to the supply. The supply of Tokens is then mixed. If a Mountain has no Mining Tokens when the Sheriff is placed (or moved) there, no Tokens will be returned to the supply. If the player who places (or moves) the Sheriff has his own Tent on the Mountain, he is exempt from discarding a Token. 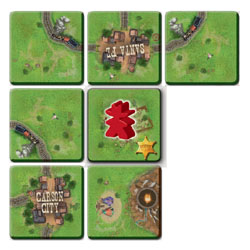