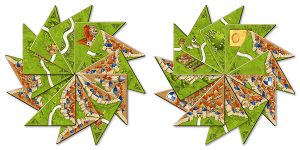 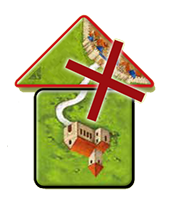 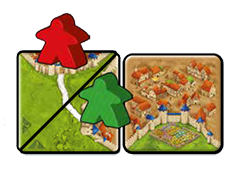 If you complete a feature with half-sized tiles, it is scored according to the normal rules but considering occupied spaces (areas) and not individual tiles. [4]

Question: When scoring a city or a road, how should we consider two Halfling tiles in one space?

Answer: The Halflings count as one occupied space (area). [Note that spaces occupied by one or two Halfling tiles are considered equivalent to a regular tile. -ed.] (1/2021) 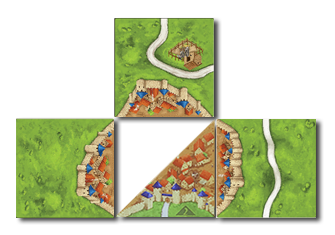 Example 1: This "city" containing a triangular gap is considered incomplete, since a city is not completed if it contains a gap. Actually, the picture shows 3 separate incomplete cities. 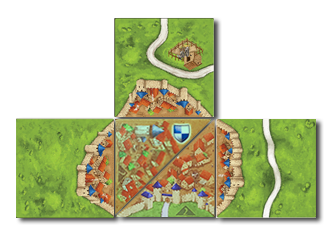 Example 2: This city containing triangular tiles is completed and can be scored. It includes no triangular (or square) gaps.

The scoring of a completed city or road will follow the normal rules but one or two triangular tiles in one square space will be counted as one regular tile. 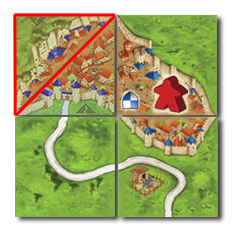 Example 3: Red plays the Halfling tile completing his city. He scores 8 points, since the two triangular tiles are counted as one regular tile. The scoring considers a city with three regular tiles and 1 coat of arms. 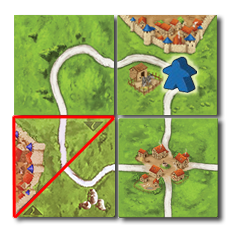 Example 4: Blue plays the Halfling tile completing his road. He scores 4 points, since the two triangular tiles are counted as one regular tile. The scoring considers a road with four regular tiles.

If two triangular tiles have been placed instead of a regular land tile, you still only score 1 point for this occupied space. [5]

Example 5: In all of the three examples the monastery is complete and earns you 9 points. 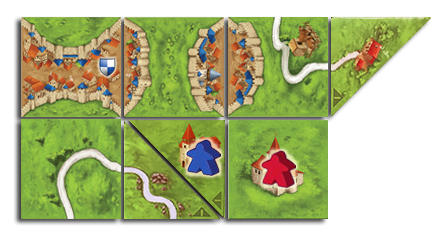 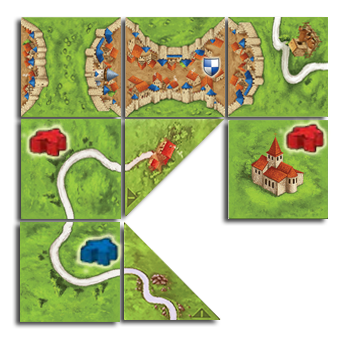 1 Vineyard | If a monastery is being completed and scored, its owner earns 3 extra points for each vineyard depicted on the tiles in the vicinity of the monastery (the square space with the monastery and the 8 spaces surrounding it). [6]

3 Sheep | You earn 3 points for the sheep on this tile if you guide your flock to the stable. [7] A wolf cannot scare these sheep away. [8]

4 Crop Circle | You play a normal turn with the crop circle tile. [9] Afterwards you determine a kind of meeple (knight, highwayman or farmer) and choose one of the following actions which all players (including yourself) must complete, starting with the player to your left:

A) ... may take a meeple from their supply and place it next to another one of their meeples of this kind on the same land tile. [11]

The clarifications from 10/2015 affected the scoring of cities and roads (each triangular tile would be considered individually from this moment on), but it changes the way monasteries should be scored, since each tile would be counted individually for monasteries too. So monasteries could score up to 18 points as you could cram that many Halflings tiles in the space occupied by a monastery and the 8 adjacent spaces. These clarifications covered some interactions with other expansions, not all of them, but provided some hints to address some other by analogy (with some house rules, if needed). They would represent a lot of consequences when considering interactions with other expansions since triangular tiles would be considered as individual tiles now. (Double-sized tile were considered individual tiles too, so this also added additional distortions to the way some expansions interacted).

Later in 2020, the re-release of Halflings for Carcassonne II included similar rules to those from 2014. There was a brief indication on how roads and cities should be scored and the rules for the monasteries were a step back from the clarifications from 10/2015, returning to the original ones from 2014. The clarifications from 10/2015 were still applied except for the scoring of monasteries (and therefore German castles by extension).

The following table summarizes the evolution of the rules and its consequences.

Let's see some interactions when applying the principles explained above: 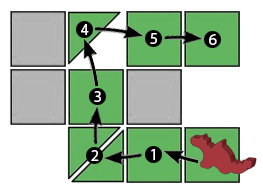 Example: The dragon moves counting square spaces. It lands on particular tiles but it affects all the tiles overlapping the space it occupies (as in step 2). It also skips any triangular gap in its way (as in step 4).

>> The Princess and The Dragon - Fairy protection [14] 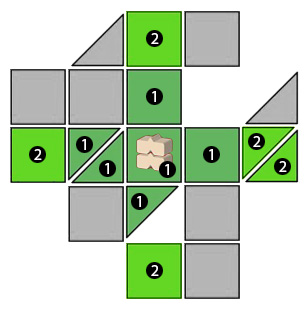 Example: The picture shows the tiles affected by the tower using different shades of green to identify tiles within range 1 and range 2. The range stretch takes into account square spaces. The tower may capture meeples in any of the tiles overlapping the square spaces in range, no matter if the space is occupied by a square tile or 1 or two triangular tiles, like in this case. 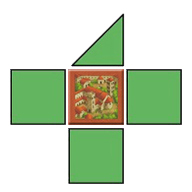 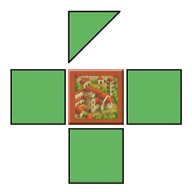 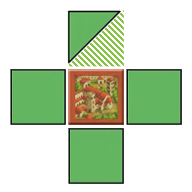 Examples with square and triangular tiles:

See the following examples involving Halfling tiles and double-size tiles (see Castles in Germany and The Markets of Leipzig.) (4/2016; updated 1/2021) 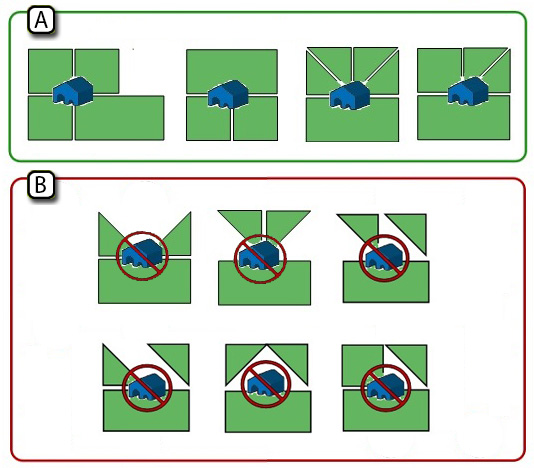 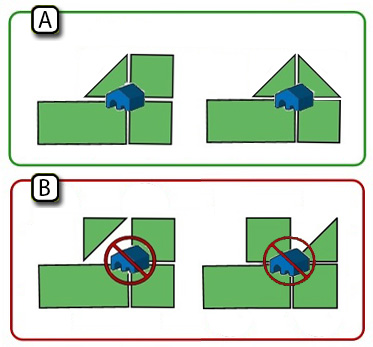 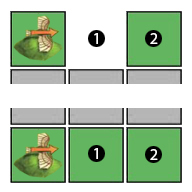 Example 1: This image shows how square tiles and holes are considered when calculating the flier distance for a horizontal trajectory. This example follows the official rules. 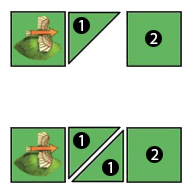 Example 2: This image shows how the flier can land on any square or triangular tile occupying a given space when following an horizontal trajectory. 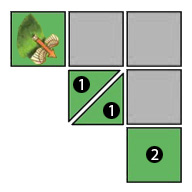 Example 3: This image shows how the flier can land on any square or triangular tile occupying a given space for a given distance when following an diagonal trajectory. 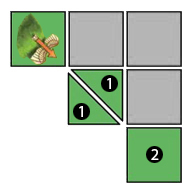 Example 4: This image shows how the flier can land on any square or triangular tile occupying a given space for a given distance when following an diagonal trajectory. 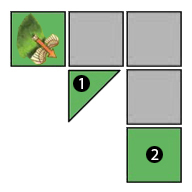 Example 5: This image shows how the flier can land on any square or triangular tile occupying a given space for a given distance when following an diagonal trajectory. 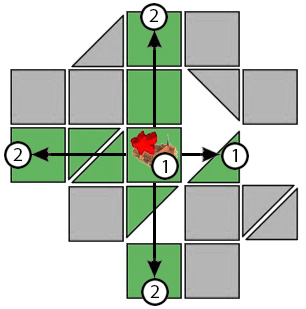 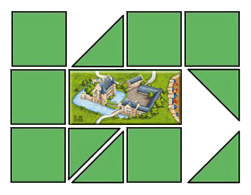 Example: This German castle will get 12 points: 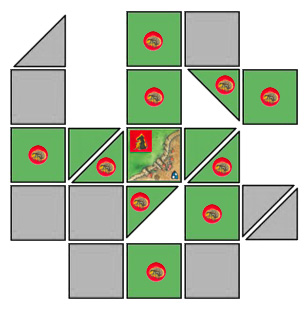 Example: This picture shows in green a contiguous outbreak area. Triangular gaps do not break its continuity and both triangular tiles in a square are affected by a flea token placed on one of them (the flea token affects the whole square space).