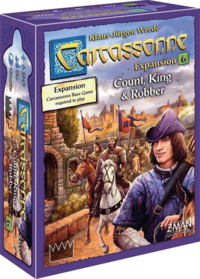 Count, King, and Robber was the sixth major expansion for Carcassonne and was released for the New Edition by Hans im Glück in 2017.

The 1st Edition of Count, King and Robber was released in 2008. Originally, this expansion bundled a collection of several smaller expansions which had been independently released for the 1st Edition at different times (2003-2008). However, these minor expansions are only available for the new Edition as a bundle.

The Count of Carcassonne tempts players to help his fellow players - not without self-interest, of course. The River II lets the game start with a river landscape that is always different. King and robber barons reward the players who build the largest city and the longest road. And as completely new landscape tiles, 5 shrines are included, which players can use to steal points from monks.

This page contains all the information for this major expansion but the River II, that is described on a separate page dedicated to the New Edition River expansions. 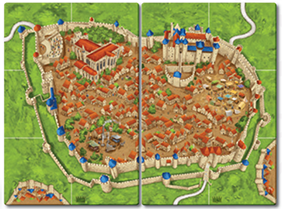 This expansion offers two different ways to start the game: instead of using the standard start tile or the River I, you can either use the two large City tiles to form the city of Carcassonne or the River II as your starting point. Other than changing which tile is placed first, these options have no impact on gameplay. In both cases, return the standard start tile to the box before starting setup.

Do not use both The River II and The Count of Carcassonne. Combining the two can lead to situations where the river cannot be completed. [1]

Details of this mini expansion have been incorporated on a separate River page. However some related information has been included here for the sake of completion.

Place the two City tiles together in the center of the play area. One side shows the city with flags, the other without. If you want to use the city as a starting tile with no effects, use the side without flags. 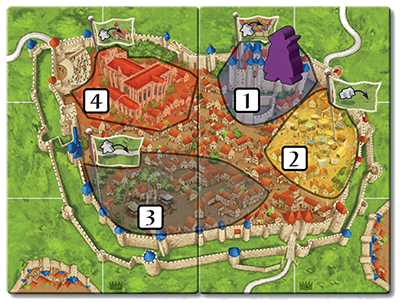 City of Carcassonne setup using the side with flags and the count figure. The image highlights the different areas of the city

The flags are used to identify the city districts:

Place the Count of Carcassonne on the castle.

2. Placing a meeple in the City of Carcassonne

Each time you perform a scoring in phase 3. Scoring a feature, [2] if at least one of your opponents gains points and you gain none, [3] you may place a meeple in one of the four city districts (even if the Count is in that district). Then, if you did the placement, [4] you may move the Count to a district of your choice within the city of Carcassonne.

Even if you complete more than one feature at the same time, you may not receive any points for any of them, so you can use this option. You may place a maximum of one meeple in the city of Carcassonne per turn. [5]

You can only place your Abbot in the cathedral in Carcassonne. [6]

When a feature (city, road, monastery, or shrine) is completed, before it is scored, all players may remove their meeples from the matching district and place them in the feature that is about to be scored, even if doing so would exceed the maximum of 1 meeple per feature. [7] [8]

The districts and where meeples in them are placed:

From the castle to a city.

From the blacksmith to a road.

From the cathedral to a monastery or shrine.

You cannot remove meeples from a district with the Count in it. Even if a completed feature would allow them to be removed, the meeples in that district must stay there until the count is moved out. The Count is always in exactly one district and never leaves the city of Carcassonne.

When you complete a feature, the player to your left can remove as many of his or her meeples as he or she would like from the matching district and place them on the feature that was just completed. Going clockwise and ending with you, each player repeats this process. The feature is then scored as normal, [9] [10] and all players return any of their meeples on that feature to their supply.

Question: Until now it was impossible to deploy a second monk to a monastery...

Answer: That is exactly the point. There was no rule that said only one monk could occupy a monastery. It was simply not possible because of the rules for placing tiles. This is the first opportunity for stealing a monastery away from a player. [11] And deploying the large meeple to a monastery may now be worthwhile as well.

Meeples that were not removed stay in their district. Meeples placed in a district remain there until removed and placed on a matching feature.

During final scoring, any meeples left in the other districts do nothing. [12] The city of Carcassonne counts as a city worth 3 points in its field.

Even the aristocracy are subject to certain rules, and cannot simply do whatever they may want. The following variants take this into account and constrain the freedom of the Count. Using these variants will provide even more tactical possibilities. In both variants, the Count may no longer be freely moved, but rather:

Place the King and Robber tiles and their matching markers as a general supply within easy reach of all players.

The King
As soon as you complete the first city (except the city of Carcassonne, if you are playing with those tiles), place the King marker on that city and place the King tile in front of you. It does not matter if you scored points for that city, only that you completed it. If a player completes a bigger city (i.e., one with more tiles [14]), that player takes the King tile and moves the token to the bigger city. The marker must always be placed on the biggest city (except the city of Carcassonne).

The Robber
The Robber tile works just like the King tile, but for roads instead of cities. [15]

If you have the King tile during final scoring, you gain 1 point per completed city (including the city of Carcassonne, if you are playing with those tiles).

If you have the Robber tile during final scoring, you gain 1 point per completed road.

Shuffle the five Shrine tiles with the other Land tiles.

2. Placing a meeple as a heretic

Otherwise, the shrine behaves like a monastery. You can place your abbot on the Shrine. 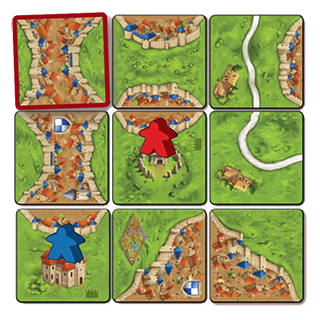 Example: You (Red player) place your tile and complete your shrine. You gain 9 points, and Blue will gain 0 points for the monastery when it is completed. Both meeples are returned to their respective supplies.

Shuffle the five new Land tiles with those from the base game and stack them normally.

Question: If I complete a city with trade good but I score nothing, can I move a meeple to the city of Carcassonne?

Answer: Yes, that’s allowed. Only immediately scored points matter. It doesn't matter if the trade goods may score at the end of the game.

Answer: This is no longer entirely true. Placing of a barn, and the subsequent scoring of the field, does count as an opportunity to remove a meeple from the city of Carcassonne. Now that fields can be scored at times other than at the end of the game, meeples from the market can be moved to fields earlier in the game. That occurs immediately after the placement of the barn, and before the fields are scored. [Joining of a farm containing a meeple to a field with a barn would logically be another opportunity – Chris O.]

Question: Can a player allow a meeple to escape a besieged city via a monastery, and place the same meeple in the city of Carcassonne on the same turn? (When does meeple escape happen?)

Answer: The knight escapes at the end of the turn, and so cannot be re-deployed in the same turn. (5/2007)

CRCR tile in Inns and Cathedrals with short roads

CRCR tile in The Festival with short roads

Question: Imagine I have an unoccupied monastery next to an occupied shrine. I place a tile with a magic portal which completes both buildings, and choose to use the magic portal to deploy a monk to the monastery. Does this declare a challenge, and if so, who wins?

Answer: This is actually an invalid placement of the meeple – the magic portal cannot be used to place a meeple on a completed feature (and the monastery is considered completed before the Move Wood phase). Thus, there can be no challenge, and the heretic gets 9 points. (updated 7/2014)

Question: When a challenge is resolved, both the monk and heretic are removed from play. If that leaves one of the features incomplete, can it be occupied again?

Answer: Yes, it can be reoccupied by using a magic portal or a meeple from Carcassonne.

×1
Lake ✎ + Volcano ✎
Several tiles have a small illustration on them. The letters in brackets show which illustration is on each tile: 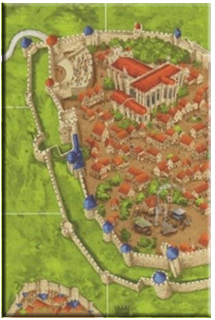 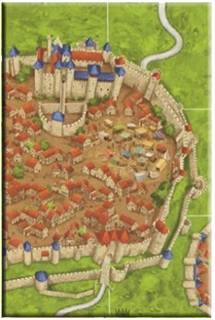 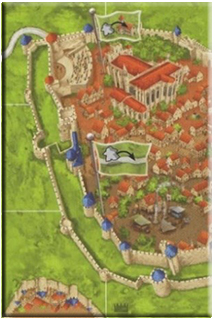 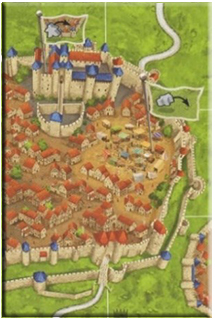 ×1
Shrine ✎ + (P)
Several tiles have a small illustration on them. The letters in brackets show which illustration is on each tile:

×1
Monastery ✎
Several tiles have a small illustration on them. The letters in brackets show which illustration is on each tile: