This expansion was originally released for the first edition, known as C1 for short, in 2012.

Mysterious shapes appear in the fields of Carcassonne, holding a strange power over the knights, thieves, and farmers of the realm.

Shuffle the new landscape tiles with those of the basic game and stack them normally.

When you draw a tile with a crop circle, perform a standard turn, following the normal order of 1. Place a Tile, 2. Place a Meeple, and 3. Score a Feature. Then, perform the new action: 4. Crop Circle Action.

After you place a tile with a crop circle on it, you must choose one of the following actions:

Then, all players (starting with the player to your left and proceeding clockwise) must perform the action you chose, and then you perform that action. 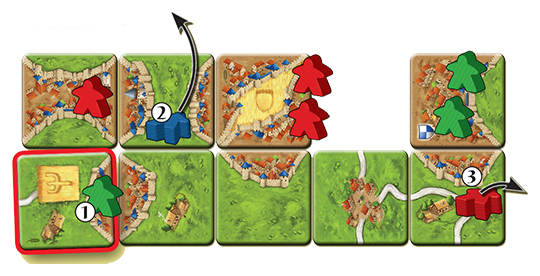