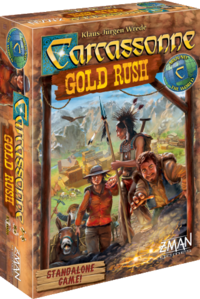 The Wild West – A land full of untamed wilderness. The construction of the first railway lines into the area brings the settlers out of their tents and into thriving mining cities. Trade with the native Indians is lucrative; especially valuable are the wild horses. But when veins of gold are discovered in the mountains, there is no stopping the mad rush for it - everyone wants to get rich overnight. But beware! Many of the gold mines may already have been picked clean by your competition, and before you know it, the gold nuggets are all gone. When you play the game, everyone has gold fever! 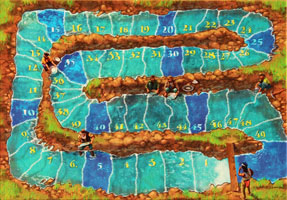 The players take turns placing tiles. A landscape of prairies, mountains, cities, and railroads will be created, on which the players will place their cowboys in order to score points. Players will search for gold in the mountains, whether or not they have the claim to do so. Once all Land tiles have been placed and final scoring has been completed, the player with the most points is the winner. 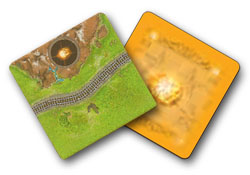 Start Tile with different back

A player must first draw a Land tile from one of the facedown piles. They may show it to all players (who may advise of “good” placement opportunities), and then place it according to the following rules:

The railroad track and prairies continue 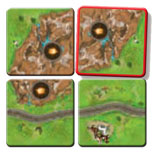 The mountain continues to the left; the prairie continues below

This tile placement would not be allowed (prairie next to mountain 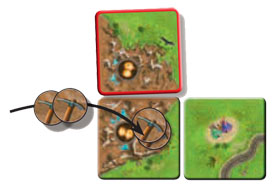 To ensure you do not forget to place these tokens, it is recommended that one player is assigned this important task.

Once a player has placed a tile, they may place a cowboy. The following rules apply:

Railwayman on a railroad, ...

Note: For your first game, it is best to play without the farmers.

BLUE may not place a railwayman because the railroad is already occupied. BLUE may, however, place a gold miner on the mountain or a farmer on either of the prairies.

BLUE may not place a gold miner because the mountain is already occupied. BLUE may, however, place a railwayman on the railroad or a farmer on either of the prairies. Regardless, the gold nugget symbol on the mountain indicates that a Mining token must be added.

If a player has no cowboys in their supply, they must continue to place tiles on their turn even though they cannot place cowboys. Do not worry: cowboys return to their players’ supplies when they are no longer needed on their respective railroads, mountains, and cities (further explained later).

YELLOW places their tent on a mountain, elsewhere occupied by a BLUE gold miner. 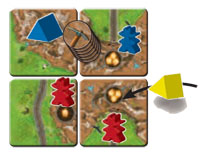 YELLOW places their tent on a mountain, elsewhere occupied by BLUE and RED gold miners, as well as a BLUE tent. Although a RED railwayman occupies the same tile, the mountain segment is vacant.

2c. Mine for gold

On a later turn, YELLOW takes a Mining token. The BLUE gold miner in the same mountain does not affect this.

On a turn in which a player chooses not to place a cowboy (2a) or pitch a tent (2b), they may choose to take the topmost Mining token from the mountain where their tent is located. It does not matter which other cowboys and tents occupy that mountain, or who possesses the most cowboys on that mountain. The Mining token a player acquires is placed facedown in front of them. A player may view the value of their acquired Mining tokens at any time, but they will only be added to the player’s score at the end of the game.

Attention: If, by the placement of a new tile, one or more railroads, mountains, or cities are completed, proceed to step 3 where these features will be evaluated and scored.

Otherwise, the next player clockwise begins their turn.

If a road, mountain or city is "completed" by the placement of the land tile, it is now scored.

All players track their points with a cowboy on the provided scoreboard, with spaces marked 0-49. Should a player acquire 50 or more points in a game, they should lay their cowboy flat (as pictured to the right) to indicate that they have completed a lap of the scoreboard. In this way, a cowboy lying flat on space 1 of the scoreboard (as pictured to the right) indicates a score of 51 points. [3]

A railroad is completed when its two ends terminate in junctions, cities, and/or mountains, or when it forms a complete loop. Completed railroads can vary greatly in length (few or many segments).

A player whose railwayman alone occupies a completed railroad scores points equal to the “length” of the railroad (number of tiles used). For example, a five-tile railroad is worth 5 points. More examples are pictured below.

If there is exactly one locomotive on a completed railroad, the score for that railroad is doubled.

If there are no locomotives, or two or more locomotives on a completed railroad, the score is not doubled.

BLUE scores 6 points (because two or more locomotives do not double the value of a railroad).

Multiple Cowboys on a completed railroad or mountain 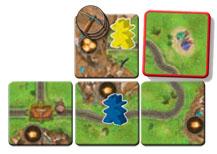 The newly placed tile connects two previously separate railroads as a single completed railroad.
BLUE and YELLOW both score 5 points, as they are tied for most cowboys.

Through clever tile and cowboy placement, multiple cowboys can occupy a single feature.

When such a railroad or mountain is completed, the player who has the most cowboys in a given feature scores the points alone. In case of a tie, all tied players score full points.

A mountain is complete when it is completely surrounded by prairies (has no open sides), and there are no gaps within. Completed mountains can vary greatly in size (few or many segments).

The player who has the most gold miners on a completed mountain first takes all Mining tokens that remain on the mountain, and then scores 1 point for each gold nugget symbol on that mountain. [4][5] 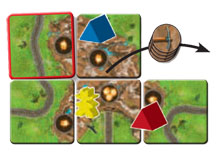 The mountain is complete. YELLOW first takes the remaining Mining tokens, and then scores 7 points (for 7 gold nugget symbols). 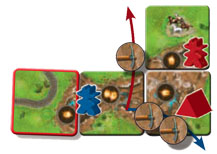 On BLUE’s turn, the leftmost tile is placed, which completes the mountain. BLUE takes the first of the 3 remaining Mining tokens. RED takes a Mining token, then BLUE takes the last one. RED and BLUE each score 5 points (for 5 gold nugget symbols). 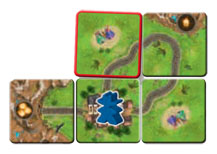 The BLUE merchant in the completed city is connected to two completed railroads and scores 6 points.

A city is complete when all railroad segments (3 or 4) emerging from that city are part of completed railroads.

The player whose merchant occupies a completed city scores 3 points for each completed railroad connected to that city.

Important: A railroad that starts and ends in the same city only adds 3 points to that city’s value (see example to the right).

Returning Cowboys to their owners

After a railroad, mountain, or city is completed, the cowboys in those completed features are returned to their owners’ supplies. These cowboys may be used on future turns.

Due to the sequence of a game turn, it is possible to place a cowboy and have it returned to you in the same turn.

BLUE places a tile and a railwayman, and scores 3 points.

BLUE places a tile and a gold miner, takes the 2 Mining tokens and scores 2 points.

We recommend playing without farmers and prairie scoring for your first game.

Unlike the other features, players only score points for their farmers in prairies at the end of the game.

Once a cowboy is placed on a prairie, becoming a farmer, it remains there until the end of the game. For this reason, farmers should always be laid flat on the prairies to remind players that they do not return like railwaymen, gold miners, and merchants. The boundaries of a prairie are formed by railroad tracks, mountains, and the edges of outer tiles. (Important for final scoring!)

Both farmers occupy their own prairie. The mountains separate the two prairies.

By placing a new tile here, the farmers’ prairies are now connected. Reminder: The player who placed this new tile may not place a farmer in that prairie, as it is already occupied by a farmer (two of them, in fact).

The game ends immediately after the turn during which the last Land tile is placed. Players proceed to final scoring.

The player with the most points at the end of the final scoring is the winner! 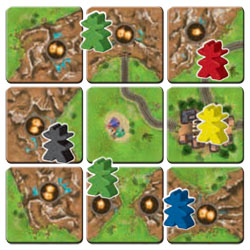 MOUNTAINS: First, all tents and Mining tokens are removed from the game. Then, the player(s) with the most gold miners on the mountain scores 1 point for each gold nugget symbol.

RAILROADS: The player(s) scores 1 point for each tile belonging to the railroad (locomotives have no effect).

CITIES: The player scores 3 points for each completed railroad connected to the city.

After each feature is scored, return the cowboys to their corresponding supplies.

The value of each prairie is determined by the number of tipi camps and wild horses occupying that prairie.

The player who has the most farmers in a given prairie scores a number of points equal to the value of that prairie. In case of a tie, all tied players score full points, as seen previously with railroads and mountains. 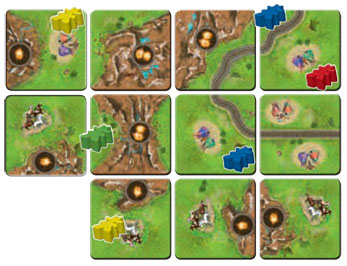 All players flip over their Mining tokens and score 1 point for each gold nugget depicted on them. Mining tokens depicting gravel score no points.

The player with the most points is the winner. In case of a tie, the tied players enter a staring duel (or contest if there are more than two). The last cowboy to blink wins!

Back of Mining Token