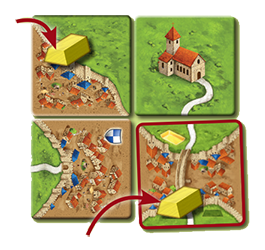 After gold placement, you may still place a meeple according to the normal rules.

When you complete a feature with one or more gold ingots on its tiles, those gold ingots are awarded. The player with the majority in the completed feature takes all the gold from the corresponding tiles. For roads and cities, every tile that is part of that road or city is included; in the case of monasteries, the monastery and each of its 8 surrounding tiles are all included. [1] [2] [3] 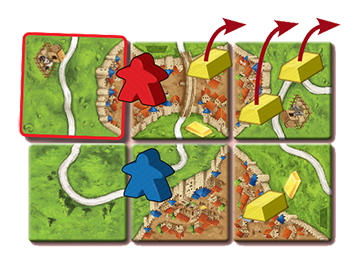 In case of a tie: If multiple players share the majority in a completed feature with gold ingots on one or more of its tiles, or if several features with gold ingots are completed at the same time and they are controlled by different players, the distribution is as follows: Starting from the active player, all players take one gold ingot to which they are entitled in clockwise order. This continues until all the gold ingots involved have been taken. [4] [5]
Players will place their gold ingots before them for the remainder of the game. The gold ingots will be scored during the final scoring. [6] 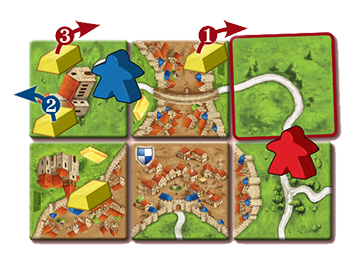 After the game ends but before final scoring, set aside all the gold ingots that are still on tiles (the ones that have not yet been collected by a player). Farmers receive no gold pieces.

After the final scoring, players scores the gold ingots they collected. The more gold ingots you collected, the more each gold ingot is worth to you. Count your collected gold ingots, and compare your final count to the values listed in the table below to determine how many points each of your gold ingots is worth. The table is also provided on scoring tile for display. 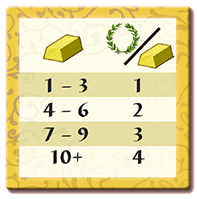 Final scoring example: You have collected seven gold ingots, meaning that they are worth 3 points each. You score a total of 21 points from your collected gold ingots.