This summary is based on the changes reflected in the German and English rules through various reprints of the first edition base game. The availability of the rules versions and the release dates may vary for other publishers.

A brief history of scoring farmers

The 1st edition rules were scored from the perspective of the cities themselves: that is, you picked a city, and counted the number of farmers on all the farms touching that city. The player with the majority of those farmers scored 4 points. Then play moved on to the next city.

2nd edition rules followed almost immediately — after Carcassonne won Game of the Year (GotY), in fact. The original 1st edition farmer rules were considered to be too difficult by the jury and they were changed; although this led to calls for Carcassonne to be stripped of the award, since the game that won was not actually the game subsequently sold as the GotY.

The 2nd edition rules changed to scoring farms from the perspective of the farms — pick a farm, count the farmers on it, and the player with the most farmers scores 3 points for every city touching the farm. But like 1st edition rules, each city could only be scored once, meaning you still had to keep track of which cities had scored 3 points and which not.

3rd edition rules came swiftly and removed that qualification, so that each city could now be scored multiple times. The great virtue of the 3rd edition rules is that you don't have to keep track of which cities have been scored, only which farms — and since you should remove the farmers after a given farm has been scored, it isn't overly difficult to do so. Also, in the 1st edition rules, the farms weren't actually scored directly, but only indirectly, making the notion of 'farmer' scoring slightly misleading and difficult to grasp for younger players (this, essentially, was the jury's objection).

Where does this document stand with farms?

While 3rd edition rules have been used in Germany since 2002, RGG initially chose to stick with the 1st edition rules. The usual arguments for this decision revolved around consistency (it would confuse people to change the rules) and authenticity (1st edition rules are the ones that won GotY, after all).

Logically enough, since its basis is the original HiG rules, ZMG uses 3rd edition scoring, and RGG ultimately also abandoned 1st edition scoring — this document uses 3rd edition rules. Also, every single FAQ, and most expansions to the game, has 3rd edition rules in mind. To date, only two of the 15-odd expansions released have been authored by RGG, and neither involve new rules. So, for example, when the earlier RGG edition of Traders and Builders talks about the pig giving a bonus point and bringing the total to 5, that's an adaptation of the original German rules, in which the total is 4. Sticking to 1st edition rules meant that RGG needed to adapt every subsequent expansion to fit — so even if 1st edition rules are more 'authentic' for the basic game, they become less 'authentic' the moment you add an expansion into the mix.

None of this was really a problem — although it did generate heated discussion — so long as players were informed about the two possibilities and agreed on which to use...

What changed the farms?

The release of the fifth major expansion — Abbey and the Mayor — may well have been the decisive factor. It was nearly inevitable that at some point HiG would release an expansion which would simply be incompatible with 1st edition farmer scoring; and here we have an expansion that potentially simplifies farmer scoring at the end of the game if you're using 3rd edition rules, but will easily double the complexity if you're still using 1st edition rules. I'll explain.

This expansion features a barn — one for each player — which can only be placed at the intersection between four farm segments. Any farmers currently on that farm are immediately scored (3 points per adjacent city) and removed. Any farmers which, later in the game, join the farm through connecting tiles are also scored (1 point per adjacent city) and removed. At the end of the game, the barn scores 4 points per adjacent city. When I first read the German rules, I wondered how RGG would adapt them. Potentially, the farmer removal and scoring could go ahead according to the usual RGG rules, although it would be odd — after all, if only the farmers on one farm need to be removed, why should a city count all the other adjacent farms to produce a score? Possible, but weird. The real problem would come at the end, though — if you score farms from the perspectives of the cites, how would you judge the value or strength of the barn? Clearly, it trumps farmers—is it worth two of them? Does it over-rule farmers on other farms touching the city? Hmm.

Well, the official RGG rules did something I didn't expect: they stuck precisely to the German rules. That is, the farmers being removed score 3 points (or 1 point) per adjacent city, and the barn scores 4 points per adjacent city at the end. The barn, in both HiG and RGG rules, uses 3rd edition scoring. But there is no indication anywhere in the rules that RGG farmer scoring in general should now follow 3rd edition rules. In other words, at the end of the game, it seems you're meant to calculate the two elements separately, using 1st edition for farmers and 3rd edition for barns. Twice as complicated, as I said.

Compare that with the effect of the barn if you're using 3rd edition rules for everything: the mechanic is consistent, there should be fewer farmers in play (and so less counting) and fewer wars for the majority. The barn should actually simplify the game... This is all purely speculative, of course, but my feeling is that this was the catalyst behind RGG abandoning the 1st edition rules in favour of those of the 3rd edition. My advice to players has always been to move to 3rd edition rules anyway—they're simpler, and allow you to play the expansions as intended. And there's very little excuse not to change now that all publishers have adopted 3rd edition scoring.

Initially, small cities were also scored differently than they are now. With the original release of the game, completed small cities (defined as a city made up of only 2 tiles) scored only 1 point per tile and pennant instead of the usual 2 points per tile and pennant. Thus, a small city would score only 2 points total. The intent was to penalize players for completing such an easy feature and to decrease the number of cities that would produce farming points at the end of the game. However, more exceptions to rules makes for a more complicated game, and in 2002 (the same time as the switch to 3rd-edition farm scoring), the special rule for small cities was eliminated. From this time on, all cities were worth 2 points per tile and pennant (plus or minus the effects of other features such as Cathedrals and Sieges). This notably changed some of the strategy of the game, as a small city now produces a reasonable number of points for minimal potential effort, and this can accelerate the number of cities on a farm, which can lead to very high-scoring farms at the end of the game.

A summary of changes over time 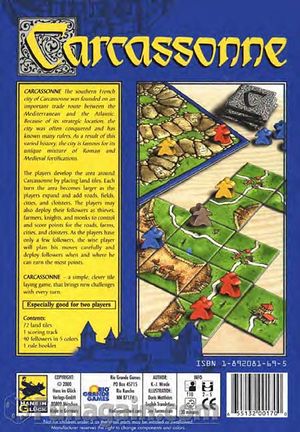 The back of the box from the original English edition of Carcassonne. Notice that the 3 farmers are standing up. Additionally, the scoreboard depicts gray cobblestones and counts above 50.
Retrieved from "https://wikicarpedia.com/index.php?title=Scoring:_A_Historical_Perspective_(1st_edition)&oldid=208555"
Categories: