The Plague was originally released in Spielbox in 2010. 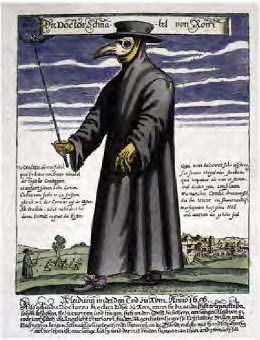 A medieval plague doctor. Source: The Society Pages (Thanks to Whaleyland.)

This expansion reaches deep into the game. The devastating plague makes the very layout of the land important. After a seemingly harmless incubation period, one might soon come to the conclusion that it is impossible to score any points in the face of the plague. But don’t be deceived! It is possible to guide the plague in the direction of one’s opponents and—on the other side of eradicated infestation—to protect oneself and accumulate points without further hinderance.

Starting from six Outbreak tokens, the plague spreads throughout Carcassonne. As soon as an Outbreak tile comes into play, every player must spread the plague further in his or her turn. A follower on an affected tile is removed without scoring. However, one can attempt to take flight from the plague—on the same road, farm or even with a city. Over the subsequent course of play, the players may eradicate an Outbreak, so that the plague may no longer spread in certain regions.

Place the starting tile. Mix the tiles of the basic game, [1] and set aside 17 tiles. These tiles should be played first. Then mix the new plague source tiles with the remaining tiles. [2] Place the tokens beside the playing area.

Outbreak token with the number "1"

As soon as a player has drawn and placed (according to the usual rules) a plague source tile, an active Plague region is created. The Outbreak token with the number “1” should be placed face-up on the tile’s plague doctor symbol. The player may not deploy a follower. [3]

Once the first Outbreak token has been brought into play, the plague spreads in every subsequent turn (if possible), beginning with the player to the left of the one who placed the first source tile. During his or her turn, each player should take a flea token from the supply and place it—active side face up—on a tile which is adjacent (horizontal or vertical, not diagonal) to the Outbreak, and which does not yet have a flea on it. [4] [5]

As play continues, one may alternatively place a flea on a tile adjacent to one with an active flea token. If a flea token is placed on a tile containing one or more followers, they are returned to their players without scoring. [6] [7] [8] [9]

The active player decides at what point, during his or her turn, the Plague will spread. [10]

Taking flight from the Plague

Once the Plague has broken out, every player may allow one (not more) of his or her followers to take flight per turn. The follower may be moved to another segment of the same road, city, or farm—no matter the distance. [11] [12]

When a player draws and places another Plague source tile, the Outbreak token with the next highest number is placed on it. The Plague will now spread from here as well. The player who drew the tile may not place a flea token in this turn, having instead the privilege of choosing where the Outbreak will occur. From now on, each active player has a choice of which active Plague region to expand.

Note: A flea token may never be placed on a plague source tile.

Outbreak token on its inactive side

When, at the start of a player’s turn, there are no more flea tokens left in the supply, the Outbreak token with the lowest visible number should be eliminated – turned onto the ‘field’ side. However, as there must always be at least one active Outbreak, after the first plague source tile has been placed, an Outbreak remains active if it is the only active one currently in play.

Flea token on its latent side

The region affected is now an ‘inactive’ Plague region. All adjacent flea tokens should be turned onto their ‘latent' sides; from this point on, flea tokens must be moved out of a latent epidemic region, rather than the supply.

After eradicating an outbreak, an additional outbreak (and always the token with the lowest number currently in play) may be eradicated if there are no latent flea tokens which could be moved at the start of a player's turn, but only if more than one outbreak is still active. [16]

It is quite possible for two or more Plague regions to merge together. When several active Outbreaks come to belong to the same region, all except the token with the highest number should be turned over. If inactive fleas become connected to a region with an active Outbreak, they should be turned onto their active sides again. As such, fleas which have become inactive can become active again through mergers. It is also possible for parts of a epidemic region to become cut off, in which case the flea tokens must be turned onto their latent side.

Eradicated Outbreaks can never become active again. A source tile with an Outbreak token on its ‘farm' side remains spared from the plague until the end of the game. A flea token cannot be placed on a plague tile, so one is secure from the Plague there. [17]

Should all 18 flea tokens be part of the same Plague region, one of them should be moved to a new tile on each player’s turn. The new tile must naturally be adjacent to the active Plague region.

If a part of a structure is afflicted by the plague, it has no impact on scoring, as long as the followers themselves are unaffected.

The plague and the double turn

During a double turn (see Traders and Builders), you perform the actions associated with the plague as follows:

Question: How does the plague behave in a double turn granted by the builder?

Answer: During a double turn, you only spread the plague once (at most). If one of the tiles is an outbreak but not the other one, yo do it too. You may also take flight from the plague only once. You only eradicate the plague once at the beginning of the turn. (8/2021)

During a double turn you perform the actions associated with the plague as follows:

When spreading the plague, the following scenarios may happen, depending on the tiles placed:

This section puts together all the actions described in the rules and shows how they fit togther during a normal turn and a double turn -where some actions can only happen once. The table summarizes all the actions and below you may find some diagrams that explain the main actions in full detail.

Diagram (A) - Adding an outbreak 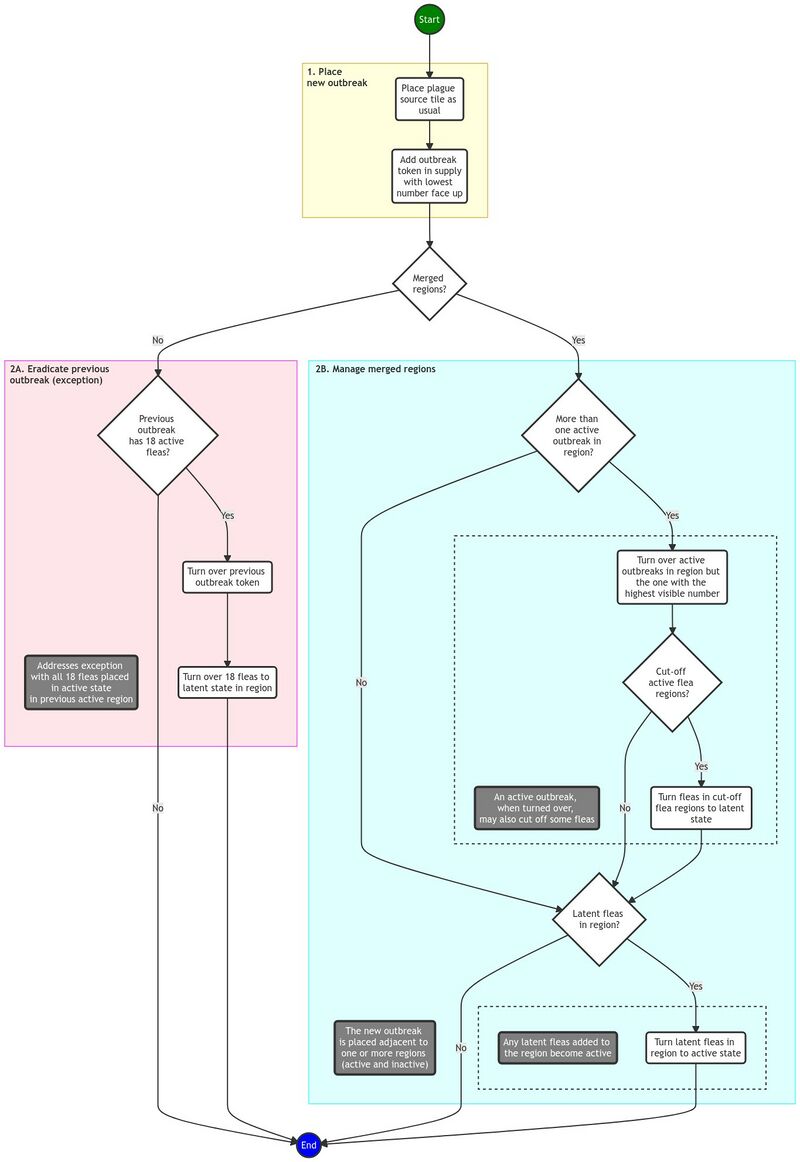 Diagram (A) - Adding an outbreak: Each turn when placing a plague source tile in 1. Placing a tile (Step 1C)

Diagram (B) - Spreading the plague

Diagram (B) - Spreading the plague: Each turn with plague active except when placing a plague tile. No specific moment in turn sequence (but after 1. Placing a tile). No fleas allowed on plague source tiles, tiles with fleas, inside the cities of Carcassonne and Leipzig or the Wheel of Fortune 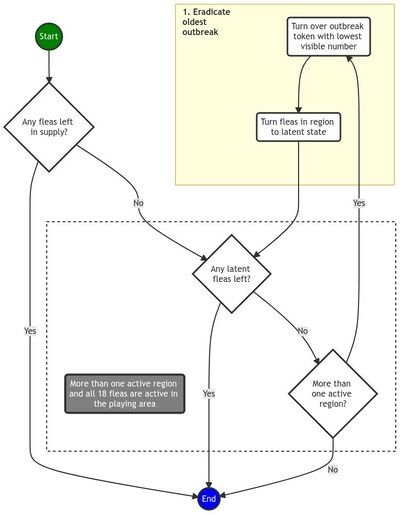 Diagram (C) - Eradicating outbreaks: Each turn at the very beginning in 1. Placing a tile (Step 1A) when the plague is active (once in double turn)